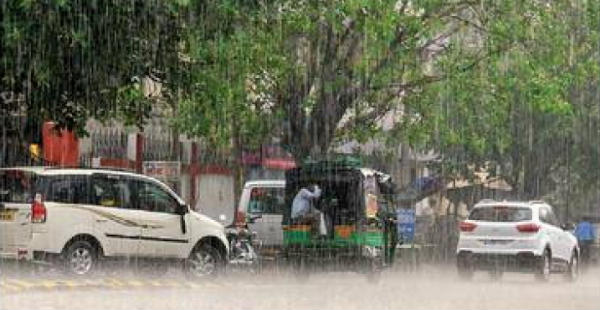 During the last 24 hours, few places over Bihar, Jharkhand and East Uttar Pradesh received very light rainfall activity. No significant rain occurred as the trough was seen quite southwards from these states.

In the last 24 hours from 08:30 am on Friday, Jamshedpur recorded 5.4 mm of rain, followed by Dehri 3 mm, rest all other places like Bhagalpur, Patna, Bokaro, Ranchi received traces of rain.

As of now, the Monsoon trough has shifted towards North and currently passes through Bikaner, Alwar, Kanpur, Sultanpur, Muzaffarpur, Purnea, Dhubri and to East Assam.

A cyclonic circulation is likely over foothills of East Uttar Pradesh and North Bihar. A trough extends from this system up to North Andhra Pradesh Coast across Jharkhand.

Now we expect, rainfall activities to enhance over these states. Foothills of Bihar will receive moderate to heavy rains at many places. Flash floods may also occur over these regions after 24 hours.

Moderate to heavy rains are expected in parts of South Bihar, East Uttar Pradesh and adjoining Jharkhand. These rainfall activities will continue over Bihar for the next 48 hours.

Many parts of Jharkhand may also receive light to moderate spells. Lighting strike is possible over few parts of Bihar and Jharkhand.