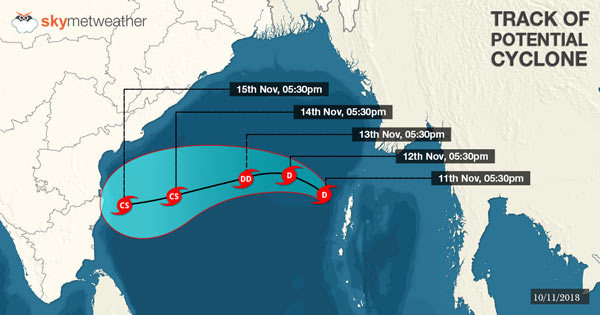 Yesterday, the weather system which had formed over Gulf of Thailand and Malay Peninsula moved over North Andaman Sea and concentrated into a well-marked low-pressure area.

At present, this system is lying over Southeast and adjoining South central Bay of Bengal. In fact, presently the MJO (Madden-Julian Oscillation) is in phase 3 with an amplitude of more than 1. It will continue over the area for another two days and will shift to phase 4 with decreased amplitude.

Most of the models suggest that this system may also concentrate into a cyclonic storm over the sea. But before it makes its landfall over North Tamil Nadu and South Andhra Pradesh Coast around November 14 or 15, this system may weaken.

However, in wake of this system, the coastal stations of Andhra Pradesh and Tamil Nadu are expected to receive heavy to very heavy rains with cyclonic strong winds on November 14 and 15. Moreover, the capital of Tamil Nadu, Chennai will also receive widespread rainfall activity.