Here is how Punjab performed during Southwest Monsoon so far 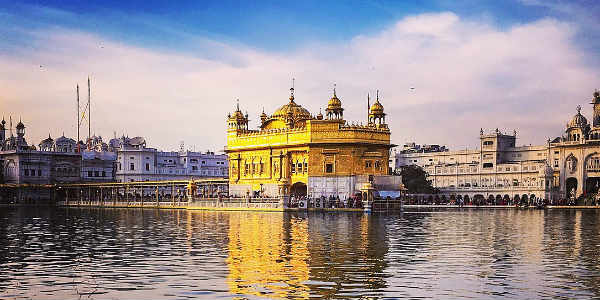 The state of Punjab has reached the fag end of Monsoon and withdrawal will come shortly. After the first withdrawal from Rajasthan, within a week Punjab is next to see Monsoon bidding adieu which is quite a rapid process where the entire Punjab bids farewell to Southwest Monsoon.

As of now, the state of Punjab is within the normal limits at a deficiency of - 16%. As withdrawal nears, the deficiency is going to stay however, it is not going to be an alarming one.

Punjab is divided into three subdivisions of Mazha, Doaba and Malwa region. Mazha lies between the rivers Ravi and Beas while Doaba is between Sutlej and Beas. Meanwhile, the left bank of Sutlej is Malwa. Around three fourth of the Punjab region lies in Malwa while the other two subdivisions are smaller pockets.

The state of Punjab comprises of foothills along with green lands and arid regions which are adjoining Rajasthan. Monsoon rains are not distributed evenly across various regions. Southwest Monsoon makes an appearance over Punjab in the months of July and August as Monsoon not only arrives late but also withdraws quite early.

The month of June was bountiful for the state of Punjab where more than double the amount of rainfall was received. The state recorded 89. 7 mm of rain against 44. 4 mm which meant 102% of excess rains. Since then rainfall has been degrading with deficiency being at - 19% for July and - 39% for the month of August. The seasonal deficiency till August 31 stood at - 14% which increased once again after first six days of September and settled at - 16%.

The subdivision Mazha has performed well including the cities of Pathankot and Gurdaspur however Amritsar remains largely deficient. 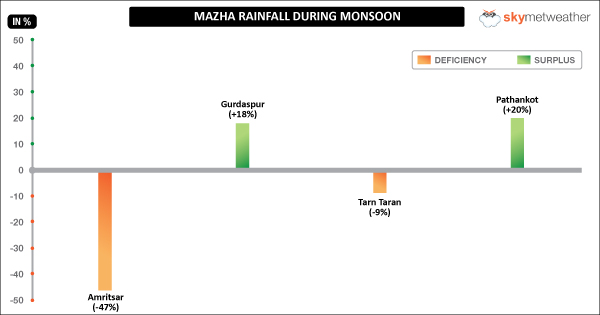 Talking about Doaba, the first half of Monsoon was alright, but the second half was quite deficient. The big surplus of Nawanshahr from 58% dropped down to 7% while the deficiency of Jalandhar and Kapurthala increased significantly. 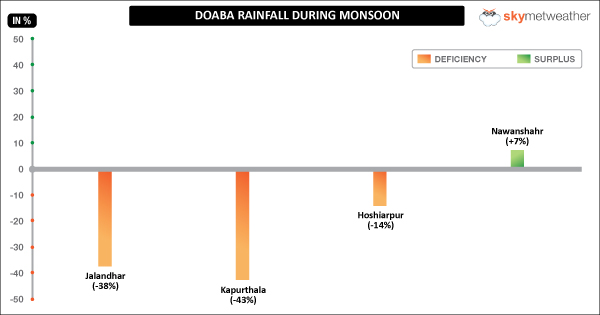 Malwa which consists of a large chunk of Punjab has seen mixed performance where the southern half has done well as compared to the northern half with Patiala seeing aa deficiency of - 4% and Barnala at 25%. 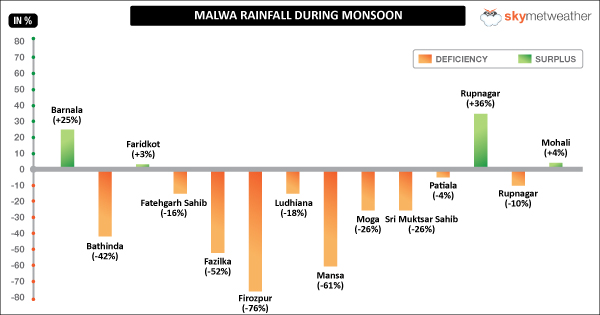 Meanwhile the border districts of Fazilka and Ferozepur have performed poorly with - 52% and - 76%.

During the next 2 days some scattered rainfall may occur over parts of Punjab particularly Malwa while the other parts only receive light rains and rainfall activity will reduce thereafter.