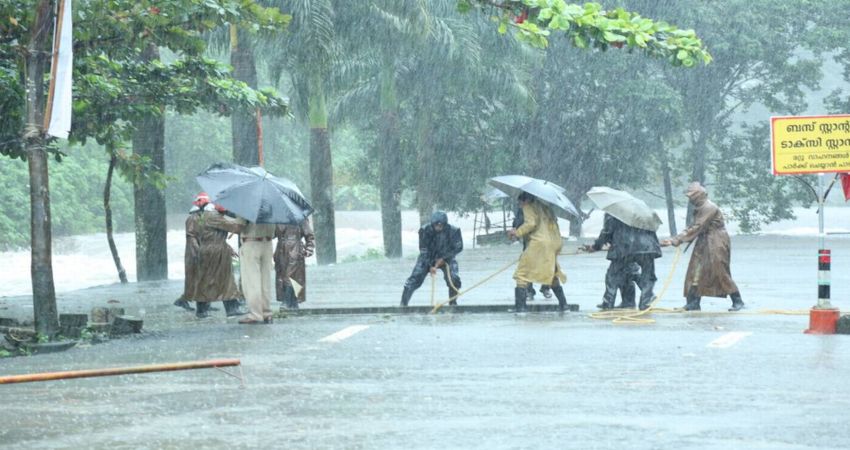 Due to the Trough along the West Coast of southern parts close to Kerala and Karnataka, during the last 24 hours, scattered moderate rain with isolated heavy spells occurred over Kerala. However, the system is likely to lose its strength and easterlies winds would commence now over the northern parts. However, northeasterly winds would continue to blow over the southern parts, due to which isolated light to moderate rain may occur over Trivandrum, Kochi and adjoining area.

Kerala is going to be the centre of action for the Northeast Monsoon for the next two days as moderate to heavy rain is forecast for the state. According to meteorologists at Skymet, the Well Marked Low-Pressure Area over the Comorin area will be the main weather system behind this rainfall activity. Thiruvananthapuram, Alappuzha, Kanyakumari and Kochi are some of the places to observe pounding rain in the next 24 to 48 hours.

In fact, light rain has already started in some areas. According to the rainfall data available with Skymet, Kochi in a span of 24 hours from 8.30 am on Monday has witnessed 10 mm of rain, Thiruvananthapuram 4 mm and Punalur 3 mm.

North Kerala was the region that was majorly being affected by heavy rains in the last 3 days due to the effect of the very severe cyclone Kyarr. But the intensity of rain is now going to subside in the region tomorrow onward and pick up pace in the southern districts of the state from 27 October.

It has been an excellent start to the Northeast Monsoon in Kerala. Since the onset on 16 October, the state has continuously been receiving good rainfall activity. There have also been instances of very heavy rainfall in Kerala which caused a flood-like situation in some areas of the state.

Kerala during the Northeast Monsoon so far has received 379.8 mm of rain which is 52% more than the October average of 250.2 mm.

Updated on Oct 25, 10:05 AM: Light to moderate rain with one or two heavy spells to continue in Kerala

The Depression over the Bay of Bengal has weakened into a Low-Pressure Area and is currently lying over Coastal Odisha. As the system is continuously moving northwards, its impact has reduced over the southern peninsula.

Moreover, the Deep Depression over the Arabian Sea which has intensified into Cyclone Kyarr is also moving in west/northwest directions, away from the Indian Coast.

Due to this movement, heavy to very heavy rains are ruled out for Kerala now. However, light to moderate rain with one or two heavy spells would continue for another 24 hours, as an after-effect of these systems.

According to the rainfall data available with Skymet, Kochi has received 68.2 mm of rainfall, followed by Alappuzha 58.9 mm, Kozhikode 42.4 mm and Trivandrum 19 mm in a span of 24 hours from 8:30 am on Wednesday.

According to our meteorologists, light to moderate rain with one or two heavy spells would continue over Kerala for another 24 to 48 hours.

Updated on Oct 23, 12:10 PM: Intense spells forecast for Kerala during the next 24 hours

Now, the Depression is expected to move further northwestwards in the Central Arabian Sea. However, a Cyclonic Circulation is still persisting and the Low-Pressure Area over Andhra Coast has activated the Monsoon surge over Kerala.

Under the influence of these systems, we expect moderate spells of rains with a few intense showers to continue for the next two to three days. In fact, a few places might even see some intense spells of rains during the next 24 hours.

Updated on Oct 22, 10:59 AM Dwindling rain in Kerala, NDRF deployed for the rescue operation

In the wake of intense rainfall on Sunday and waterlogging on Monday, the government had begun evacuating people from their homes. Around 2810 people have been evacuated and moved into 17 relief camps on Monday. The most number of camps were opened in Ernakulam (11), while there are 3 in Kollam district and one each in Kottayam, Alappuzha, and Palakkad.

National Disaster Response Force personnel have been deployed in Ernakulam, Alappuzha, Kollam, and Pathanamthitta, and 5 more NDRF teams have been sought by the State government for rescue operations.
However, now the rains have eased out and an orange-level alert has been issued in the Idukki district only.

During the last 24 hours, moderate rain and thundershower activities were observed in many parts of Kerala. Now, there is a possibility of heavy rain in many parts of the state during the next 24 to 36 hours. Thereafter, rains would taper over the region but moderate showers would continue.

After heavy rain in parts of Kerala from 8.30 am on Thursday up to 8.30 am on Friday, the weather activity has now become a little mild. Only some moderate rain has been observed in the state in a span of 24 hours, from 8.30 am on Friday. For instance, Karipur during this period has managed to record 58 mm of good rain, while Kozhikode received moderate rain of 29 mm, Kochi 16 mm and Punalur recorded 30 mm of rain. This moderate rainfall activity will continue in Kerala till October 22 after which the intensity of rain will increase and several parts in the state may begin to record heavy rain due to the Northeast Monsoon.

The Northeast Monsoon has already made an entry into the southern states and Kerala has started to observe weather activity in terms of good rain. For instance, Kozhikode in a span of 24 hours from 8.30 am on Thursday received 74 mm of heavy rain, while Kottayam and Karipur received 53 mm and 44 mm of rain, respectively. Some other places like Kannur and Thrissur also saw 39 mm and 7 mm of rain, respectively.

According to meteorologists at Skymet, this weather activity is going to pick up pace in the next 2-3 days. They have forecast very heavy rain in the state on October 22 and 23 due to a Low-Pressure Area expected to develop in the Bay of Bengal. There could be a flood-like situation in some areas. Therefore it is advised to take precaution.

For detail, read: Kerala gears up for very heavy rains, residents alerted against the possibility of floods