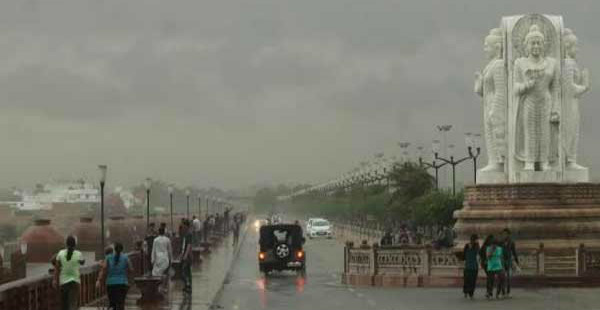 Rains have remained far from pouring over Lucknow ever since the month of June began. However, finally, heaven opened the door for the ‘city of Nawabs’ and the last 24 hours prove to be rainy for Lucknow. The capital of Uttar Pradesh recorded a hefty sum of 60 mm of rains mainly during the early morning hours today spanning from 5:30 to 08:30 am.

Not only it made the city rainy but also affected the third International Yoga Day led by honorable Prime Minister in Lucknow. In fact, these were the second heavy spells recorded from the last 4-5 days after June 16 when Lucknow witnessed some exceptionally good showers of 111 mm. Since then, the state capital has remained rain-free.

These rains also led to dropping the mercury levels. As on Monday, the maximums that settled at 39.8°C curtailed down drastically to rest at 34.7°C on Tuesday.

However, now heavy to very heavy rains are not anticipated for the capital of Uttar Pradesh but on and off light spells are likely to keep occurring over the city. As reiterated by Skymet Weather, these heavy rains were due to the trough that was running across Uttar Pradesh. Moreover, a cyclonic circulation was also over eastern and adjoining central parts of Uttar Pradesh.

As of now, heavy to very heavy rains are not foreseen but Lucknow will keep on witnessing on and off rains for the next 3-4 days. Due to this, the progress of Southwest Monsoon will also remain sluggish.

The normal date of the onset of Southwest Monsoon over Central Uttar Pradesh including Lucknow is around June 20-22, however, this year Monsoon seems to get delayed.

Skymet Weather further states that rains are expected to increase over Lucknow and over a few parts of Uttar Pradesh around June 26 when a few good spells are anticipated thereby marking the arrival of Monsoon as well. Henceforth, on and off showers of light to moderate nature will keep showering upon Uttar Pradesh including Lucknow.