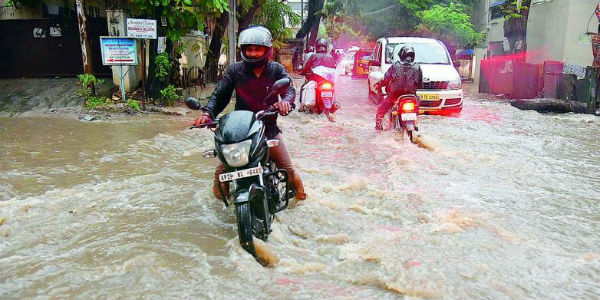 On early morning Monday, heavy Monsoon rains deadened the traffic flow over Chandigarh, Panchkula and Mohali, leading to a massive traffic jam for more than three to four hours. Also, these heavy downpours swamped most of the connecting roads to these regions.

These rain waters flowed inside the houses in the residential societies and wreaked havoc in several places situated in Chandigarh, Panchkula and Mohali. The most affected roads included all the entrance points of Chandigarh from the side of Mohali and Panchkula. Moreover, the Mohali airport has also been flooded.

In a span of last 24 hours from 8:30 am on Monday, Chandigarh recorded a whopping rainfall of 115 mm.

These weather conditions can be attributed to a Western Disturbance which was seen moving across Jammu and Kashmir and adjoining areas as an upper air trough. Due to this, mainly areas of Himachal Pradesh, Uttarakhand and adjacent areas of Punjab and Haryana have received a good amount of rainfall in the last 24 hours.

The reason for these incessant rains was due to an unforeseen development of the thunderclouds during the morning hours over these regions. Thereby, heavy downpours lashed several areas over Chandigarh, Mohali, Panchkula and adjoining areas between 8:30 am to 11:30 am.

Click here to check the Live Lightning and Thunderstorm status over Chandigarh:

At present, we do not foresee any major weather change to happen once again though patchy rain and thundershowers cannot be ruled out over Chandigarh, Mohali, Panchkula and adjoining areas during the next 24 to 36 hours. The weather conditions are expected to remain warm and humid with moist southeasterly winds blowing over the region.

Furthermore, good Monsoon showers are likely to make a comeback over Chandigarh and adjoining areas by August 24. Though they may not cause much of distress as it did shortly.

As on August 21, the sub-divisional rainfall distribution statistics shows that Chandigarh is rain deficient by 28%. However, it is likely to cover the deficiency figures if these incessant rains continue to lash the region.