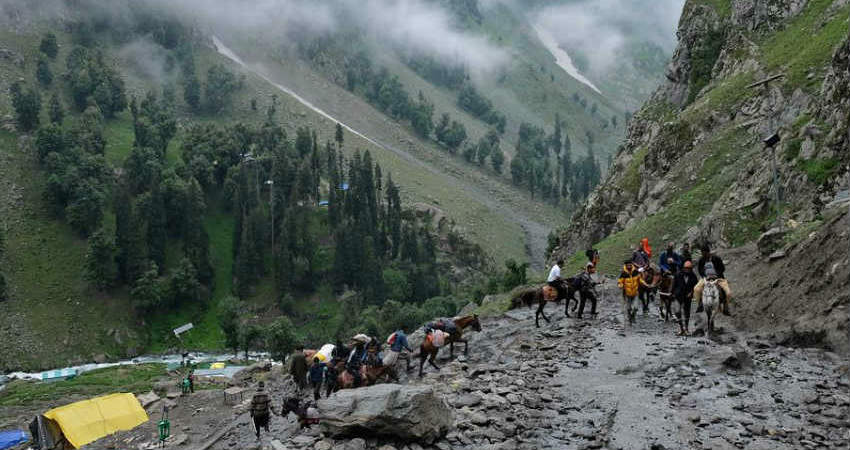 Until August 4, the Amarnath Yatra has been suspended in wake of inclement weather conditions. As per our experts, no major changes are seen in the weather conditions in the coming days as well. In the past 24 hours, Jammu recorded 25 mm of rains, Bhaderwah 9.7 mm, and Katra 10.4 mm. We can say that fairly widespread rain and thundershowers have been seen over the state moreover mainly along the foothills.

At present, the Chenab river is flowing above the danger level. Also, the Kishtwar’s district, the catchment area has received good rains. The intermittent rains also triggered a landslide at Morh Passi near Balli Nallah along the Jammu-Srinagar National Highway in the district, blocking the only all-weather road linking Kashmir with the rest of the country.

During the next 48 hours, all over Jammu and Kashmir moderate rains with heavy spells in pockets are expected. But then the foothills and lower regions of the Jammu and Kashmir will continue to witness moderate rain and thundershowers for the next three to four days. These heavy rains might result in landslides and shooting of stones on the Jammu and Srinagar national highway, particularly in the stretch between Ramban and Banihal. Also, as per the sources, Baltal and Pahalgam have become slippery due to recent heavy rainfall and the situation is likely to aggravate in the next couple of days.

Around August 4, there is a possibility that the situation might improve over the mid and higher reaches. Whereas, moderate rains with isolated heavy spells will continue over the foothills mainly over Kathua, Samba, Udhampur, Katra and obviously the catchment areas.