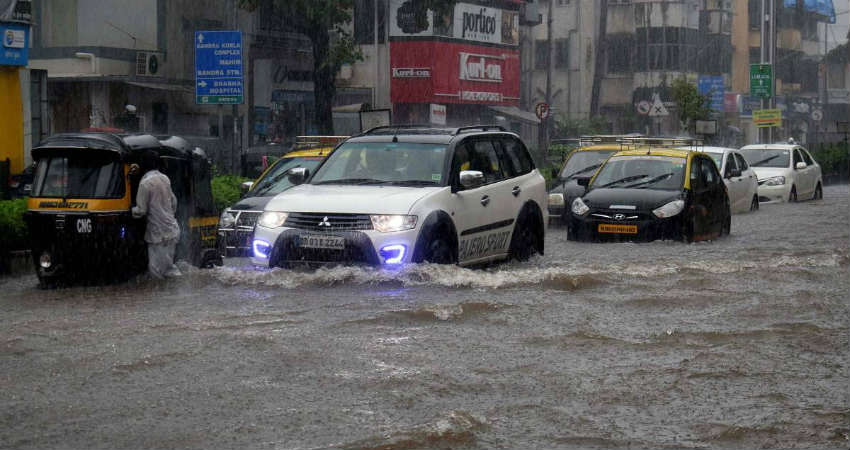 Southwest monsoon made an explosive start over Mumbai submerging most parts with deep water. The onset of monsoon as such was 2 days ahead of schedule on 09th June and the early arrival matched with 2018 for sharing the same date. Last year the monsoon had arrived on 14th June but was delayed significantly the previous year (2019) when it made an appearance on 25th June.

Mumbai was deluged with copious rainfall of 221mm in just 9 hours (8.30 am- 5.30 pm). There was a respite in the night and 24 hours of rainfall ended with a total of 231mm recorded at airport observatory Santacruz. This is the most resounding start in the recent past with a double 3 digit rainfall in 24 hours. In the first 10 days of June, Mumbai has recorded 426.9mm of rainfall against a normal of 89mm, an excess of 338mm. A heavy downpour just fell short of reaching the monthly normal of 493.1mm.

Light and scanty showers have been observed today but it seems to lull before the storm. Heavy to very heavy rains are likely to lash the city and suburbs between 11th and 15th June. Mumbai, Navi Mumbai, Thane, Kalyan, Palghar, and Alibag are at risk of getting deluged. Other pockets of Konkan also stand a chance of extremely heavy rains including Sindhudurg, Raigarh, Mahabaleshwar, and Ratnagiri during this period.

Mumbai is getting attacked with severe weather from 2 fronts. There is a cyclonic circulation in the medium levels (10,000’-15,000’) over East Central and North Arabian Sea. Over the Bay of Bengal, low pressure is coming up anytime soon to become more marked shortly. The presence of two identical systems on either side of the coastline creates an ideal situation for heavy rainfall over Mumbai. The complexity of the situation increase as the low pressure after crossing the coast on 12th June is remaining more or less stationary over eastern parts. The longevity and severity of harsh weather conditions for the entire Konkan region in general and Mumbai, in particular, is feared between 11th and 15th June.

Inclement weather conditions will lead to waterlogging and inundation of low-lying areas. Astronomical high tide in the afternoon and again at wee hours with a wave height of about 4mtr will force the backflow of water from the sea to the land areas. Heavy rains accompanied with strong winds may compound the degree of difficulty in providing relief operations. Communication and connectivity will get disrupted affecting rail, road, and air traffic.

Weather update and forecast for June 11 across India

Low Pressure over the Bay of Bengal soon, vigorous Monsoon for one week

Flooding rains to commence over Mumbai and suburbs by the weekend