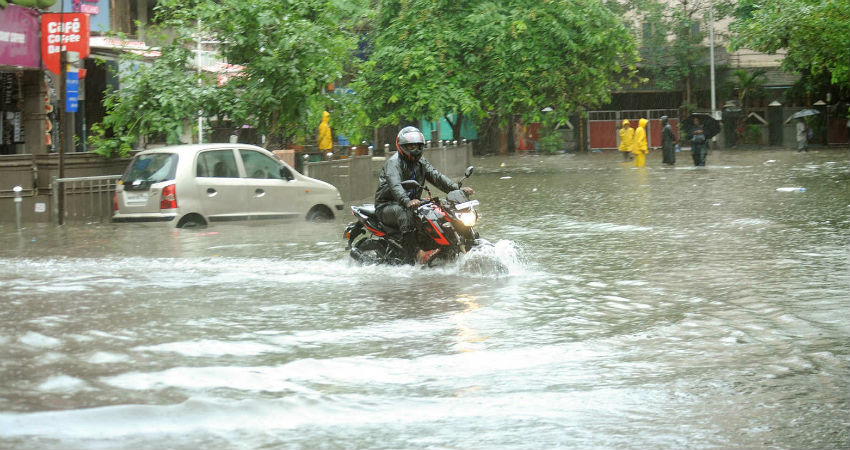 The month of July started with a bang for the city of Mumbai. In the initial two days only, heavy Mumbai rains were able to cover half of its monthly rainfall target of 841 mm. Combining the data of July 1 and 2, total rains to the tune of 467 mm were recorded.

Since July 1 until now, a total of 528 mm of rainfall has been recorded. However, since July 3, the rain intensity has significantly decreased and in the last two days, the city has seen moderate showers only.

During this time of the year, Mumbai city gets influenced by various weather systems. One of them being the offshore Trough, which remains either partial or extends up to full length, right from Konkan and Goa Coast up to the coast of Kerala.

The second reason that triggers the Monsoon surge, is the presence of a strong system in the Bay of Bengal and the third being the Monsoon Trough that shifts northwestwards and runs along the foothills of the Himalayas. All these major weather systems accelerate heavy rains in Mumbai.

At present, a Low- Pressure Area is lying over South Uttar Pradesh. This system is slowly and steadily shifting eastwards. Moreover, after 24 hours, the Monsoon Trough is expected to shift further and come closer to the foothills of the Himalayas.

In the wake of these systems, light to moderate intermittent rains will occur over Konkan and Goa including Mumbai during the next three to four days. The chances of some short spells of heavy rains during this period cannot be ruled out, but the showers will remain mostly patchy in nature. Mumbai rains will get recorded to the tune of 30 to 50 mm during these days.

Thereafter, the cross-equatorial flow will become weak as an Anti-Cyclone will take a form in the Southeast Arabian Sea and adjoining Indian Ocean. Due to this system, winds will blow as north-westerlies, thus slowing down the rainfall activities along the entire West Coast including Konkan and Goa region

Overall, we can say that it will be a leaner phase of Monsoon with no possibility of hefty showers over Mumbai and its suburbs. Mumbai rains will occur with light to moderate intensity only. We expect the city to record 20 to 30 mm of rain during this phase.