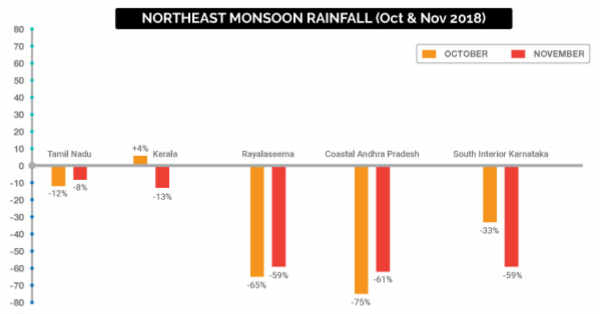 Year of 2018 is inching towards El-Niño conditions which is expected to get matured towards the winter of 2018 or spring of 2019. The projections were made that the Northeast Monsoon would behave normal this season. Also, Tamil Nadu being the main beneficiary was expected to witness rainfall above normal.

The fact is that everything is not turning true. Firstly, the Northeast Monsoons got delayed and initiated with a mild start by the fag end of October. The month for Kerala remained positive by a marginal note that is 4%. Whereas, the other states swayed towards negative with largely rain deficit over Rayalaseema, Coastal Andhra Pradesh and Karnataka by 65%, 75% and 33% respectively.

No recovery was seen during the month of November for these rain deficit states and that this had further mounted the rain deficiency. Thus, these pockets now continue to remain highly deficit. Even Kerala has also turned negative by 13%. Deficiency for the state of Tamil Nadu is still hanging around 8%.

First few days of December have gone by, but we have just seen a marginal improvement for Tamil Nadu. However, it is still far from satisfaction. As of today, the seasonal deficiency for Tamil Nadu from October 1 to December 4 is 13%.

We also need to keep in mind that December is not the rainiest month. So this makes it almost next to impossible to cover up the rain deficiency.

As per the experts, some weather systems would form around December 9 and will impact the weather till December 12. During these three days, Tamil Nadu may witness some good spells of rains along with neighborhood states may also experience thundershowers.

The Northeast Monsoon covers five subdivisions of Peninsular India- Coastal Andhra Pradesh, Rayalaseema, South Interior Karnataka, Kerala and Tamil Nadu. Out of all these, Tamil Nadu is the main beneficiary during the Monsoon season that receives less rains during Southwest Monsoon because it lies in rain shadow area.

According to facts, 35% of annual rainfall is during Southwest Monsoon and over 50% of rains is covered in a span of just three months during Northeast Monsoon. Even distribution of rainfall is a rare thing to happen in any season. Similarly, highly skewed distribution is also a very rare thing to watch and this time it is diverse.