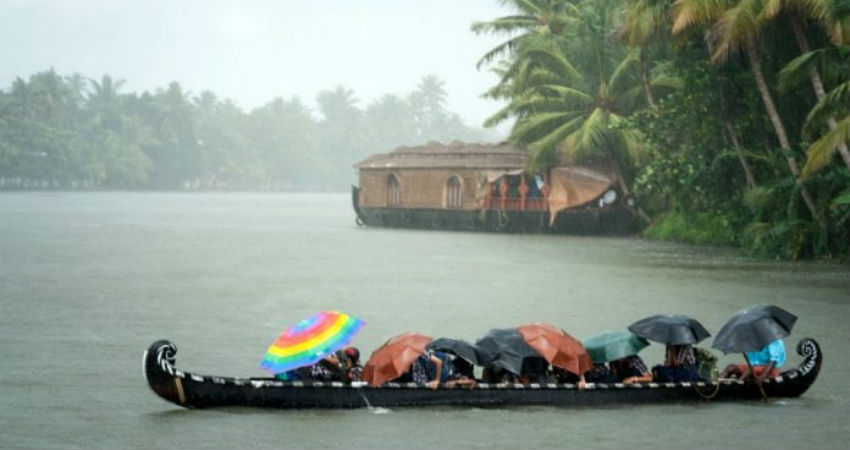 After giving flooding rain activities over Tamil Nadu, weather has gone almost dry over the state now and only some light rainfall activities are going on over the region.  Similar is the case for Kerala as well.

In fact, Northeast Monsoon is gotten subdued over Tamil Nadu as well as over most of the parts of the South Peninsula.

At present, we do not expect any significant weather activity over Tamil Nadu including the city of Chennai as well as Kerala during the next four to five days.

However, some light activity is being forecast for Southernmost districts of Tamil Nadu and over Kerala in the coming days.

Whereas the weather over Karnataka, Telangana and Andhra Pradesh will remain almost dry.

In the wake of the further movement of this system, rain activities have reduced over the South Peninsula. Now also we expect only light scattered rains over Tamil Nadu and South Andhra Pradesh with isolated over Kerala and Karnataka. Weather of Telangana and North Andhra Pradesh will be dry. Whereas isolated light rains may be a sight over Chennai and Bengaluru.

Updated on Dec 2, 11:10 AM: Active Northeast Monsoon to give moderate to heavy rains in South Tamil Nadu, Kerala, Karnataka, Lakshadweep

Vigorous Northeast Monsoon conditions continue to give heavy to very heavy rains over South Peninsula during the last 24 hours as well. Situation has been grim in Tamil Nadu, wherein unabated rains during the last 2-3 days have led to flooding in many districts, leaving them crippled.

Seventeen people died after a wall collapsed in a village in Coimbatore on Monday morning. Rescue operations are underway but ongoing rains are posing hindrance. In wake of more heavy rains, authorities has shut down the schools and colleges in Chennai, Tuticorin, Tiruvallur and Kancheepuram.

Widespread moderate rains with few heavy spells were seen in Kerala, South Interior Karnataka and South Andhra Pradesh. Lakshadweep too has recorded heavy to extremely heavy rains, wherein Minicoy recorded 213 mm of rains. This has been on account of twin low pressure areas marked in Southwest and Southeast Arabian Sea.

According to Skymet Weather, moderate to heavy rains would continue to batter parts of South Tamil Nadu, Kerala, South Karnataka and Lakshadweep. Rains would ease out in North Tamil Nadu including Chennai now.

Tamil Nadu is gearing up to experience heavy rain and thundershowers at many places during the next 12 to 18 hours. These rains will be experienced in places like Chennai, Vellore, Madurai, Coimbatore, Salem, Kodaikanal, Dharampuri, Rameshwaram, and Pamban.

Thereafter the intensity of the rains will start decreasing gradually. With this, the day temperatures will decrease significantly.

These rains will turn out beneficial for crops such as coconut, groundnut, paddy sugarcane and etc. Simultaneously these rainfall activities would also improve the groundwater level.

A fresh Monsoon surge is all set to affect South India, as a new Low-Pressure Area has formed over Southeast Arabian Sea and adjoining areas of the Indian Ocean. With this, rain will make a comeback in South India. Already multiple areas in Kerala as well as Tamil Nadu have received light to moderate rains in the last 24 hours. A few areas received heavy spells. We expect the weather activities to increase from today over Kerala. There would be light to moderate rain mainly with heavy spells in some pockets. This would bring a prolonged spell of Monsoon rains which will continue until December 2. By the night of December 2, this Low-Pressure Area would move further away over Lakshadweep. Due to this, the rainfall activities would decrease over Kerala and as well as over other parts of South Peninsula.

At present, the Northeast Monsoon, as well as the easterly wave, have become active over South India. Thus, we expect good rains to lash Chennai and adjoining coastal areas of Tamil Nadu as well as Kerala for at least the next three to four days. Chennai may receive on and off good rains until December 2. There are chances of waterlogging and traffic jams in the city.

Also, a Low-Pressure Area is expected to develop over Southeast Arabian Sea around November 30. The system will gradually move in Northwest direction towards Lakshadweep Islands. Its effect will be felt over Kerala on November 30 and December 1 in terms of intense rains and thundershowers.

The Northeast Monsoon is still subdued over most parts of the South Peninsula. However, isolated heavy rains have been recorded over coastal stations of Tamil Nadu and in the past 24 hours, even the interior parts of Tamil Nadu received light to moderate spells.

Now we expect Northeast Monsoon to revive once again as the easterly waves will become active. Moreover, northeasterly winds will also pick up the pace.

A Low-Pressure Area is expected to form in the southeast Arabain Sea. Therefore we now expect active Monsoon conditions to prevail over coastal Tamil Nadu for the next week or so. The intensity of rains will be more over South Tamil Nadu. The nature of these rainfall activities will be moderate to heavy.

While Kerala and South Interior Karnataka along with South coastal Andhra Pradesh will get comparatively fewer rains.

As had been forecast by Skymet, Northeast Monsoon has once again got subdued over South India. During the last 24 hours, the rain activities have come down over Tamil Nadu by a large extent since yesterday. Only some coastal districts of Tamil Nadu and one or two places in Kerala have received rains in the last 24 hours. Rain intensity in Chennai also came down and the city recorded only some light rains.

Now, we expect the Monsoon surge to weaken further. The easterly wave will also subside. Thus, rain activities over Chennai will now reduce. Only some isolated light rain activities are likely over a few districts until November 26.

Updated on Nov 22, 12:47 PM: Northeast Monsoon on way to recovery, rains in Tamil Nadu ahead

Northeast Monsoon has started its journey towards recovery, with rains returning to most of Peninsular India. In fact, two major pockets of Tamil Nadu and Kerala have been reporting rains and thundershowers of moderate intensity during the last few days.

As a result, the surplus which has been falling consecutively has now become stagnant. October ended with huge rainfall surplus to the tune of 54%, which got consumed in November due to subdued Northeast Monsoon conditions. At present, the rainfall surplus for South Peninsula stands at 22%.

Now, Tamil Nadu, whose cumulative rainfall which had slipped into negative, is also improving. From 9% deficiency as on November 20, it has now come up to 8% on November 21.

According to weathermen, we can expect moderate rains in the coming days over Tamil Nadu, Kerala, South Interior Karnataka, Rayalaseema and South Coastal Andhra Pradesh.

As the remnants of Cyclone Bulbul have moved away, northeasterly humid winds are setting in along the East Coast. These winds are strengthing gradually. Moreover, a Trough is extending from Sri Lanka up to Southeast Andhra Pradesh Coast in the lower levels. Also, the flow of northeasterlies could be seen along the South of Kerala Coast. Hence, rainfall activities will pick up pace along the Tamil Nadu Coast, South Andhra Pradesh Coast. A few moderate spells are also likely here. However, Kerala and Karnataka will observe a reduction in rainfall activities during the next 24 to 48 hours. Scattered rains are likely in the southern parts of Telangana and Rayalaseema. The wind pattern will change as northerly winds would be replaced by easterly winds over Telangana and Andhra Pradesh.

Moderate to heavy intensity rain is expected in Tamil Nadu and Kerala for the next 24-48 hours. The southern districts of both the states will face the major action of the Northeast Monsoon in terms of rain. There are also chances of heavy to very heavy rain in Lakshwadeep during this period. South Interior Karnataka is also one region where people can observe good rainfall activity.

The rainfall activity in the region would largely be a result of the well-marked low-pressure area in the Comorin region and South Sri Lanka coast. This system will move in a northwest direction and is likely to intensify into a depression tonight or tomorrow in the southeast Arabian Sea. In fact, there is a high probability of the system intensifying further into a deep depression. So we can say that the Northeast Monsoon is going to remain active for at least the next three days in the region of Tamil Nadu and Kerala.

The Northeast Monsoon since the onset on October 16 has been active in the entire southern peninsula. All the five subdivisions of Tamil Nadu, Kerala, South Interior Karnataka, Coastal Andhra Pradesh and Rayalaseema are observing very heavy rain. According to the rainfall data available with Skymet South Interior Karnataka in the month of October so far is observing a rain surplus of  88%.

The last four days, in particular, have been very good as the daily rainfall in the region is almost double the normal figure. In the next 24-48 hours, Tamil Nadu and Kerala can expect some relief as the intensity of rain will subside. But heavy rain is forecast for entire Karnataka and Coastal Andhra Pradesh during the same period.

As forecast by Skymet, extremely heavy rain is being observed in the state of Tamil Nadu for the last 2-3 days. According to the rainfall data available with Skymet, Karaikal in a span of 24 hours, from 8.30 am on Monday recorded very heavy rain to the tune of 113 mm. During the same span, Salem and Tondi recorded 97 mm and 50 mm of rain, respectively. While 45 mm of rain was witnessed in Adirampattinam and 30 mm of rain in Madurai. The state capital Chennai also recorded moderate rain of 28 mm.

Looking at the weather condition Skymet has issued a red alert in Tamil Nadu. For the next 2-3 days, there is going to be good rain in Kerala coastal Andhra Pradesh and parts of Karnataka. In fact, Kerala and parts of Karnataka are already receiving heavy rains. Flood-like situation can be observed in some parts of Kerala already.

During the next 24 hours, Northeast Monsoon is likely to give heavy rains over many parts of Kerala and Coastal Karnataka and in few parts of North Interior Karnataka as well as West Tamil Nadu. Rest parts of Kerala, Tamil Nadu, Karnataka, and Andhra Pradesh will witness light to moderate rain and thundershowers.

Northeast Monsoon 2019 this time made an early onset making an appearance on October 16 itself. Since then, good rains have begun to lash the states of Andhra Pradesh, Tamil Nadu, Kerala, and Karnataka.

In fact, a Low Pressure is all set to form in the Southwest Bay of Bengal adjoining Tamil Nadu Coast which will result in heavy rains over the state of Tamil Nadu including the city of Chennai. Moreover, the Nungambakkam observatory in Chennai has already recorded 101 mm of rains in the last 24 hours, which is also the first three-digit of the season for the city. It looks like Chennai will easily surpass its monthly mean of 315.6 mm of rain, which is 142 until today.

Talking about the state of Kerala, rains have already begun to be heavy in the state with Kozhikode observing 74 mm of rainfall along with Kottayam as well as Karipur recording 53 mm and 44 mm of rainfall, respectively.

More showers are expected to continue wherein these showers will see an increase in rainfall activities and heavy rains may make an appearance between October 22 and 23 due to the upcoming Low-Pressure Area in the Bay of Bengal. Flood like situation may also be seen in some parts of Kerala.