PM Modi at the Climate Action Summit: Not just words but roadmaps and strategies to Combat Climate Change 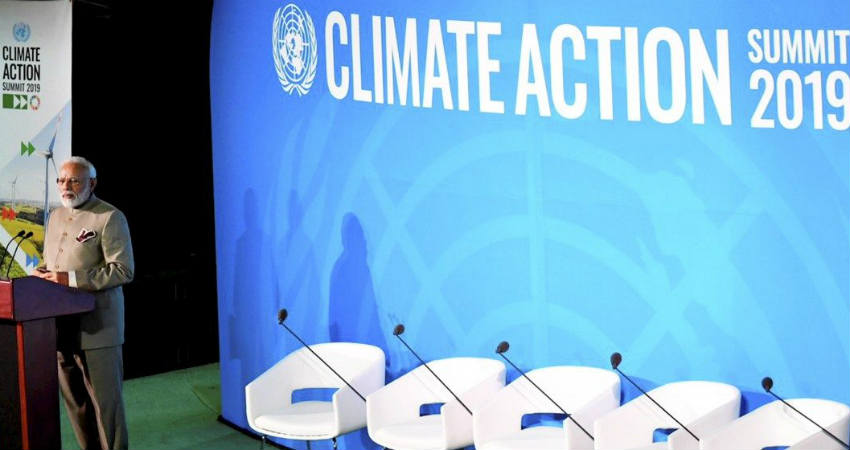 PM Narendra Modi, who is on a US trip right now, where after his Howdy Modi event in Houston, Texas, the Prime Minister visited New York to attend the Climate Action Summit 2019. The summit was called by UN Secretary-General Antonio Guterres who called world leaders so they would come up with their concrete plans and potential actions to be able to solve the climate crisis.

Modi was one of the first speakers at the Summit where he began with acknowledging the fact  that climate change is not only difficult but also a significant problem but there is not enough being done to combat it.

India, on the other hand has come up with roadmaps as well as strategies more than just words. He also said that India has set targets and milestones in renewable fuels, along with water management and conservation, e-mobility as well as helping in reducing India’s dependence on single-use plastic.

India is increasing its dependence sources of energy, which are non-fossil fuel based. By 2020, India will increase its renewable capacity to 175 GW, and will see a further increase to 450 GW. e-mobility will be a priority.

India is also advancing to mixing of petrol and diesel with biofuel on a large scale along with which at least 150 million families have been given access to clean cooking gas connection.

Commitment towards water conservation has increased including rainwater harvesting and water resource development by starting Mission Jal Jeevan. 50 billion USD will be invested in the program in future.

Internationally, at least 100 countries are connected with India’s solar panel network. Sweden, India and more partners are launching a leadership group for the industry transition track. This will help the government and the informal sector in bringing in low-carbon pathway solutions to industries which are a cause of Pollution.

India has also founded the Coalition for Disaster Resistance Infrastructure so as to build resilient infrastructure and to be equipped enough to face natural disasters. On August 15, India also took a stand against single-use plastic.