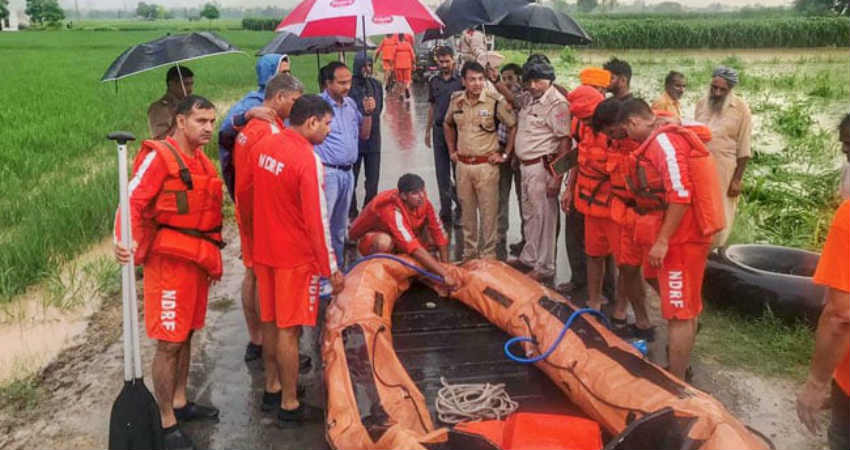 Updated on Aug 21, 1:15 PM: More than 300 villages have been affected in parts of Ropar, Jalandhar and Ferozepur districts, all because of the flooding in Sutlej river, which has further caused further damage to thousands of acres of crops. Villagers have spent nights on rooftops and helicopters have been deployed today for airdropping  food and water supplies to the affected.

Updated on Aug 21, 09:30 AM: In Jalandhar, 20 villages in Lohian Khas have been flooded after a dam was damaged due water overflow.

Updated on Aug 20, 7:30 PM: Over one lakh cusecs of water released from Hathini Kund barrage today

Published on Aug 20, 1:30 PM: Both the states of Punjab and Haryana have been suffering big time due to heavy rains and flood like situation over the region. Nine people were rescued by the Indian Air Force on Monday from flooded parts of Karnal. Moreover, the hills of North India have also been witnessing a similar situation.

Parts of Ludhiana also had to be evacuated as floodwaters entered the region. 2.4 lakh cusecs of water had been released from Ropar headwork, due to which the DC of Jalandhar ordered National Disaster Relief Force (NDRF) and State Disaster Relief Force (SDRF) to remain stationed at vulnerable points in parts of Shahkot, Nakodar, as well as Phillaur.

In flood hit villages of Punjab, a national calamity has been declared, as was mentioned by CM Captain Amrinder Singh. The finance department has also been directed to  release compensation to farmers which remains pending against previous crop losses.

On the other hand, Haryana CM has also issued orders for evacuation of people from affected areas in Yamunanagar, Kaithal, Kurukshetra, Karnal, Panipat and Sonipat.

Relief camps have also been set up by Ferozepur administration for residents living in 52 villages close to the Sutlej River. More than 200 Armymen have been deployed along in Makhu and Zira for evacuating people. Meanwhile, Delhi is on flood alert as Yamuna has breached its banks.