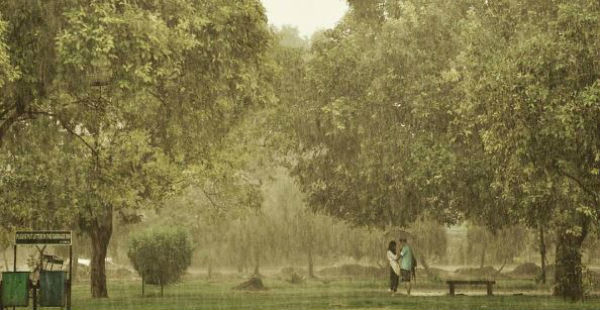 As the month of April ends, the deadly heatwave conditions over northwest plains are shown the exit doors thanks to good pre-Monsoon showers. The first whip of good rain was seen over the region on April 22. Post that spell, rains of April 25 has mellowed the temperature levels quite a bit.

This spell of rainfall can be attributed to a lot of weather systems in place. Since last few days, southwesterly winds from Arabian Sea are feeding moisture over Rajasthan and Northern plains. A fresh Western Disturbance is over North Pakistan and Jammu & Kashmir and its induced cyclonic circulation is seen over central Pakistan. A trough from this system is seen up to West Uttar Pradesh across Delhi NCR.

Due to all these weather systems, the entire northwestern plains got good pre-Monsoon rainfall activity in the recent past. And for now, more rains accompanied with dust storm and thunderstorm activity is expected over Delhi, Haryana, and adjoining West Uttar Pradesh for next 3-4 days.

By April 29-30, the trough will become more prominent and spread and intensity of rainfall will increase. Places like Delhi-NCR, East Rajasthan and Haryana will get intense showers. Temperatures which are near normal for the month of April are likely to stay this way only.  The heatwave conditions which were seen around April 20-21 over many parts of northwest plains will not make a comeback as of now.