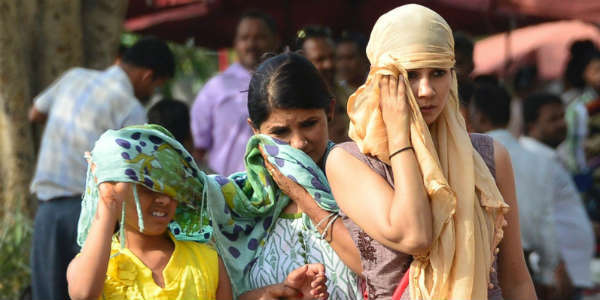 The summer is at its peak and the summer heat is making the life miserable in most parts of India. But, especially the parts of Jammu and Kashmir, Himachal Pradesh, Rajasthan, Punjab, Haryana, and Delhi are reeling under severe heatwave conditions.

This intense hot weather is likely to stay for next 24 to 48 hours.

The Palam observatories in Delhi saw the mercury touch 44 degrees. Whereas, Ganganagar and Churu in Rajasthan have recorded temperature above 45.0 degree Celsius mark.

This intense spell of heatwave will take a back seat as a feeble Western Disturbance is seen over parts of Jammu and Kashmir. It’s induced system is over Central Pakistan and Punjab. Moreover, southwesterly winds after traveling from the Arabian Sea will increase the moisture over the northwestern plains.
Due to this system, we expect the formation of thundery clouds over Punjab, Haryana, Delhi, and North Rajasthan and in few parts of West Uttar Pradesh.

Hence, during the next 24 to 48 hours, we expect thunderstorm and dust storm activities with light rains over these regions.

Such high temperatures are unlikely for these regions; but in the span of 24 hours, temperatures will drop marginally over these states by bringing the much-needed relief in northwest India.