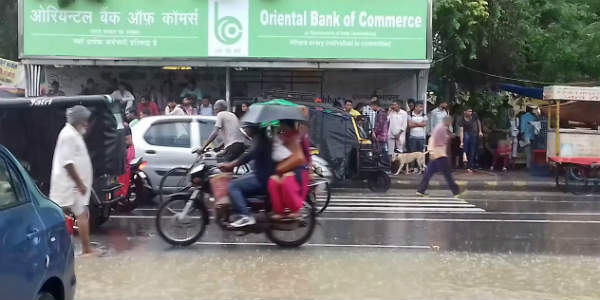 After a gap of four to five days, some scattered light rains occurred over parts of Punjab and Haryana. However, these pre-Monsoon spells were not widespread and remained mainly confined to the northern parts of both the states.

These rains were due to the Western Disturbance that has approached the Western Himalayan region. At present, this system is over Jammu & Kashmir. It has already induced a cyclonic circulation over Southwest Punjab and adjoining Haryana and North Rajasthan.

In the wake of this, scattered light rains occurred over parts of Punjab and North Haryana. Within the span of 24 hours, from 08:30 am on Sunday, the cities like Amritsar, Bathinda, Pathankot, Ambala, and Sirsa recorded some traces of rains.

As these are the pre-Monsoon season, the rains will be accompanied by thunderstorm and lightning along with strong winds. These activities are most likely to occur in cities like Amritsar, Ludhiana, Jalandhar, Nawanshahr, Pathankot, Ambala, Chandigarh, Karnal, and Hisar.

Isolated pockets may also experience dust storms. These on and off the short spell of pre-Monsoon activities are expected to continue for another 24-48 hours. Thereafter, the induced cyclonic circulation would move away eastwards leading to the prevalence of dry weather conditions.