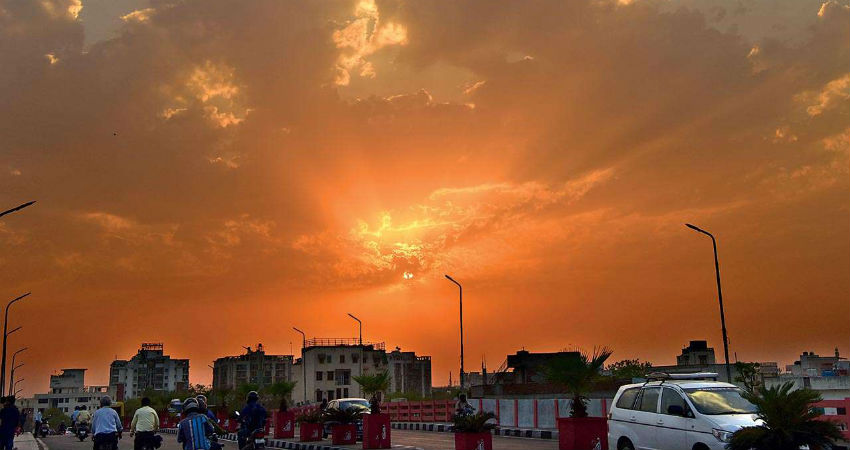 Rajasthan is reeling under extreme heat conditions for the last one week or so. North and East Rajasthan is scorched more than the usual heat island of West Rajasthan. Ganganagar is consistently recording the highest temperature in the country for the last few days. The blazing temperatures are witnessed over pockets next to the border areas of Haryana and Punjab. During this week, many places registered maximum temperatures in mid 40’s on consecutive days. Northeast Rajasthan conspicuously scored over West Rajasthan by recording flaring mercury levels: Ganganagar 45.8°C, Churu 45.4°C, Pilani 44.7°C, Alwar 43°C and Suratgarh, Hanumangarh and Anupgarh also above 45°C.

With the monsoon air over north India around the 1st week of July, the mercury levels start easing out over the state, particularly Northeast Rajasthan in the proximity of the national capital Delhi. Monsoon advances about one week earlier than West Rajasthan over this pocket. However, in the absence of monsoon winds over North India, drier northwesterly from across the border are sweeping the region. Few places in Pakistan like Jacobabad, Rohri, and Nawabshah are scaling temperatures close to 50°C and this heat is getting advected across parts of Rajasthan.

Monsoon arrives normally around 30th June over the eastern parts and covers most of the state by 05th July. The last picket over extreme West Rajasthan (Jaisalmer, Barmer, Phalodi) is reached only by 08thJul. However, there are no visible signs of monsoon winds that have yet to reach the national capital Delhi. Environmental conditions are not favorable for any early change and therefore monsoon rains are not likely to show up before 09th July over the eastern half of the state. And to reach the last post bordering Pakistan, it may even roll over to 15th July or later.

Heatwave like conditions will continue for the next 4-5 days over places like Ganganagar, Hanumangarh, Dholpur, Alwar, Churu, Pilani, Swai Madhopur, Bundi, and Kota. Isolated thunderstorms and squally dust-raising winds can not be ruled out over these parts in the next 2-3 days. The extreme western parts like Barmer, Phalodi, and Jaisalmer may escape the fury to some extent. A cyclonic circulation over these parts and adjoining border areas is fetching moist southwesterly winds from the Arabian Sea, thereby raising humidity but dropping temperatures.

Delhi struck with an unusual heatwave, monsoon not in sight yet