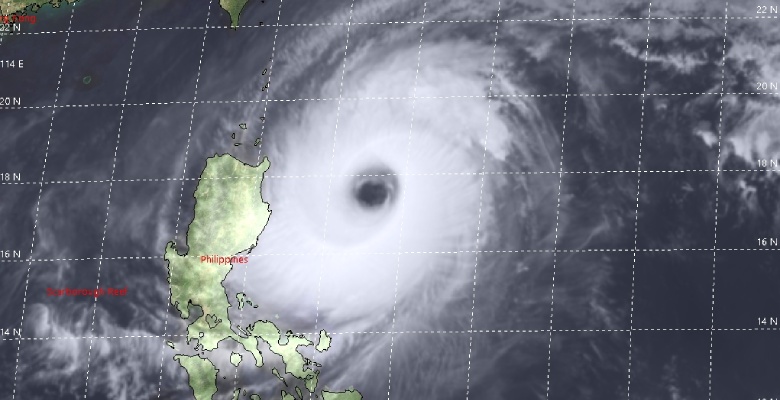 Suragae, the first super typhoon of this season in the west pacific has barreled away from the east coast of the Philippines. The robust typhoon still retains the status of a Cat-IV equivalent hurricane packed with winds in excess of 200kmh. The storm is positioned about 550km northeast of Manila and is moving northwest slowly with a pace of 8kmh. Typhoon is expected to stay on track for another 12hr before changing course towards the north and later northeast.

The beauty of this huge weather system has been the 'EYE' of typhoon manifesting very clearly its position and centre in the satellite imagery. Earlier the 'eye' had a diameter of about 50km with sharp edges and a circular shape. The latest picture reveal this feature have expanded in excess of 100km and also oblong and a bit ragged too. The typhoon continues to have a warm centre surrounded by a ring of the cold and symmetric convective wall, a show of devastating potential.

Typhoon remains in a favourable environment with warm sea surface temperature, low vertical wind shear and strong poleward and equatorward flow. However, as it recurves, it may encounter hostile conditions with large upwelling lowering sea surface temperature and possible increase of wind shear. Steady weakening of typhoon is expected after 36hr and will also have a tendency to accelerate. The threat which earlier loomed large for the east coast of the Philippines is nearly getting over as the storm spirals away in the open seas.

There are 19 tropical cyclones on record around the globe that have achieved this intensity. Super typhoon Suragae has the distinction of being the only cyclone in the month of April achieving this strength. Surely it registers its name as an 'outlier'.