Ujjain records 109 mm heavy rains, to continue for next 24 hours 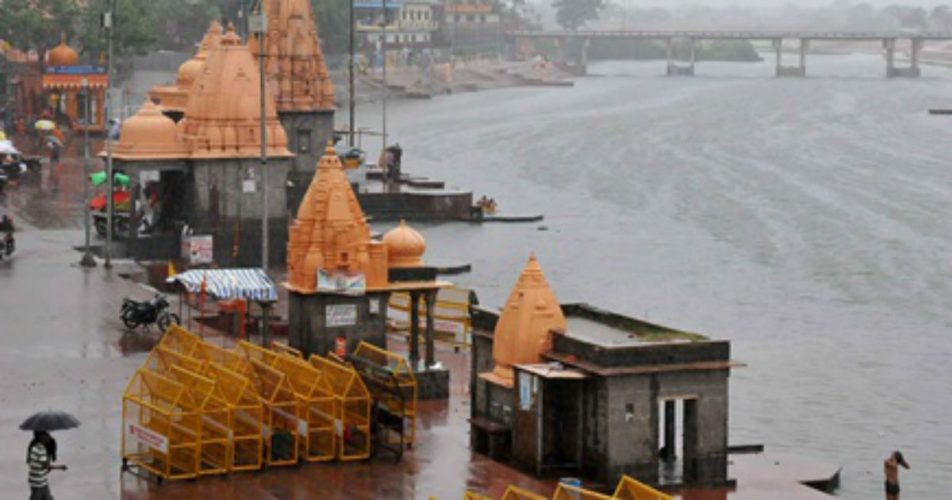 Monsoon rains don’t seem to be bidding goodbye to the flooding state of Madhya Pradesh from many days now. Normally, the Monsoon rains start subsiding from the state.  However, this time rains are continuing till now that too with a considerable intensity.

In the last 24 hours, the city of Ujjain received a whopping 109 mm rain.

Already Shipra and Chambal rivers are on a spurt following these rains. Moreover, small dams on the rivers have to keep their gates open so as to avoid excess rainwater storage and slitting. This is further adding to the water level in the rivers. The water is already flowing over multiple small bridges in its way.

Now, this rainfall activity is likely to continue over the city for next 24 hours and decrease thereafter. However, the rains will decrease significantly after tomorrow morning.

Ujjain is the fifth largest city of Madhya Pradesh and one of the most important Hindu pilgrimage destinations, known for the centuries old Mahakaleshwar Temple.

West Madhya Pradesh has received very heavy rainfall a number of times during this Monsoon season. It’s been longer than a month that flooding conditions is being observed over multiple regions.

September ends with another low pressure over Bay of Bengal, may become depression

Weather update and forecast for September 29 across India

Weakened Cyclone Gulab to give heavy rains in Mumbai tomorrow