United States, destination that is beautiful every season of the year 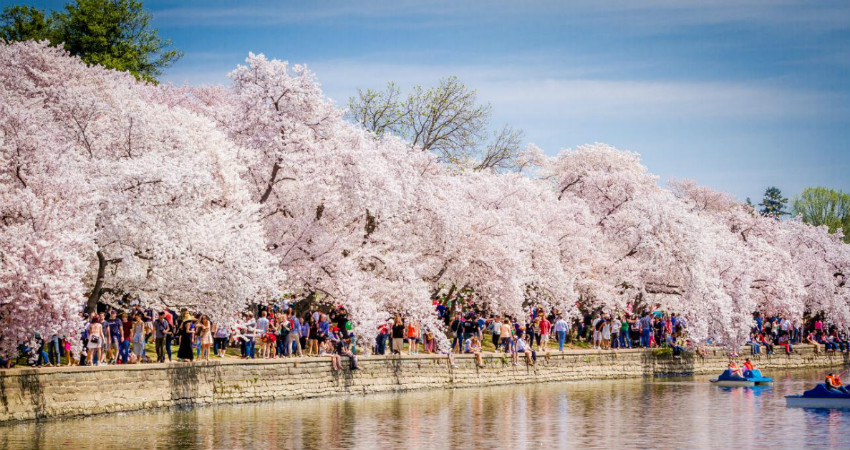 The best times to visit Washington, D.C., Maryland and Virginia are from September to November and March to May. In the autumn, the sweltering summer is gone, taking with it most of the high season tourists. Second to fall is spring, which is also a mini high season thanks to the National Cherry Blossom Festival in late March and early April. Summer in D.C. is hot and sticky, making less than ideal conditions for exploring the great outdoors.

Average high temperatures fluctuate between the upper 50s and upper 70s, making this shoulder season a pleasant time to visit. Make sure to bring layers because the lows can slide into the 30s.

December, January and February make up the low season: Hotel prices are lower, but remember, so are the temperatures. Winters are freezing in Washington – literally. Carry coat, hat, gloves, scarf and thermal underwear to help combat the temperatures, which generally hover in the 20s, 30s and 40s.

Spring kicks off with the National Cherry Blossom Festival in mid- to late March. Average temperatures are still pretty brisk at the start of spring, but they'll usually climb into the mid-70s by May, making this season a great time to experience the city's plentiful outdoor attractions.

The months between June and August are the busiest and hottest of the year in D.C. High average temperatures in the upper 80s are coupled with sticky humidity.

One can head for the Inner Harbor, where the Top of the World observation level at the World Trade Center offers a panoramic view of the entire city.

Try to temp your taste buds at bars and restaurants in the historic waterfront neighbourhood of Fells Point.

A must-see is Fort McHenry, a star-shaped fort where Americans resisted a British fleet during the War of 1812. Those soldiers’ defence provided the inspiration for America’s national anthem, “The Star-Spangled Banner

Follow the Historic National Road out of Baltimore and west to Frederick, a crossroads of American history with a small-town feel. You can also take a walking tour and learn about battlefield surgery in the National Museum of Civil War Medicine before heading south for Antietam, scene of the bloodiest single day in American military history.

In next stop, Winchester, Virginia, try to visit the Museum of the Shenandoah Valley. It tells the story of the valley’s history and the area’s culture and is surrounded by seven acres of spectacular gardens.

Do check out Luray Caverns and then drive the breathtaking Skyline Drive through the 200,000-acre Shenandoah National Park. Hike along trails and admire waterfalls, wildflowers and more from one of the 75 overlooks, or take a guided ranger tour or horseback ride through the park.

Charlottesville is a college town with a youthful, sophisticated vibe. The surrounding area is famous for wineries, but one can opt for the Red, White and Brew trail with stops at wineries, breweries, a cidery and distillery in the Blue Ridge foothills.

Not to be missed is Monticello, the only home in the U.S. on the United Nation’s World Heritage list. Thomas Jefferson’s restored mountaintop estate encompasses the house, flower and vegetable gardens, and a plantation that tells the story of a large and diverse community. The visitors centre offers four museum exhibits.

En route to Williamsburg, tour the historic Richmond area. Step into the state Capitol building designed by Thomas Jefferson, cruise the downtown canal built by George Washington, or check out more than a dozen themed gardens at the Lewis Ginter Botanical Garden.

Experience the beginning, middle and end of Colonial America in a single day via Jamestown, Williamsburg and Yorktown. All three connect via the 23-mile Colonial Parkway.

Jamestown, the first permanent English settlement in the New World, dates back to 1607. In Williamsburg, visitors can explore more than 40 shops and restaurants in Merchants Square and experience Colonial Williamsburg’s Revolutionary City, historic trades and shops. British colonial rule ended in America at Yorktown on 19 October 1781, when Lord Cornwallis surrendered to George Washington’s besieging army.

Drive southeast from Williamsburg to Virginia Beach, which holds a Guinness World Record as “the world’s longest stretch of pleasure beach.”

One can see the world’s largest collection of decorative and antique decoys at the Ward Museum of Wildfowl Art in Salisbury. In the port town of Cambridge, visit the Blackwater National Wildlife Refuge, an important nesting and feeding area for bald eagles, ospreys and waterfowl.

St. Michaels was dubbed “the town that fooled the British” when locals hung lanterns in the trees, tricking the Royal Navy into overshooting the houses, during the War of 1812. Today it’s a romantic spot for strolling its historic streets and popping into boutiques or feasting on crab cakes while overlooking the harbour. Easton is a top-10 honouree in the book 100 Best Small Towns in America. Tiny Oxford, featured in James Michener’s novel Chesapeake, is reached by the longest cable-free ferry in the USA.

Annapolis, Sailing Capital of the USA

Leave Maryland’s Eastern Shore via the soaring Chesapeake Bay Bridge for Annapolis, with its host of Colonial buildings clustered around the 18th-century Maryland State House, the oldest State House in continuous legislative use in the U.S. Enjoy lively cafes and bars along the waterfront, or browse the shops along the brick-lined streets of the Annapolis Historic District. Take a scenic harbour cruise and a guided tour of the U.S. Naval Academy.

Back to DC or Baltimore

Take a last lingering look at the scenery of the Capital Region USA en route to Washington, DC or Baltimore to drop off your car and catch your flight home.