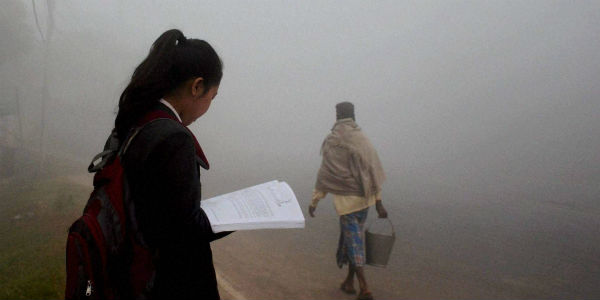 The lowest visibility was recorded at Amritsar, Sri Ganganagar, Sundernagar, Patiala and Hisar wherein it dropped to less than 25 meters. In the same way, Bahraich and Bareilly also saw visibility less than 50 meters each.

At present, the sky seems clear over most of northwestern plains as well as over Indo-Gangetic plains. Besides this, minimum temperatures have dropped significantly, so much so that most places over the aforementioned regions are recording night temperatures in single digit.

In the wake of clear sky and low minimums, the air near the earth surface cools down leading to condensation of moisture content. Moreover, the winds are also light during the night hours.

So, the three factors, low temperatures, high humidity and light winds lead to the formation of fog. Right now all of these conditions are persevering over the Northwest India, Indo Gangetic plains and Northeast India.

When the sun shows up, day temperatures start to escalate and winds also pick up pace resulting in the dispersement of fog.

Skymet Weather expects similar weather to persist during late night and early morning hours over the Northwest India, Indo Gangetic plains and Northeast India for the next few days.