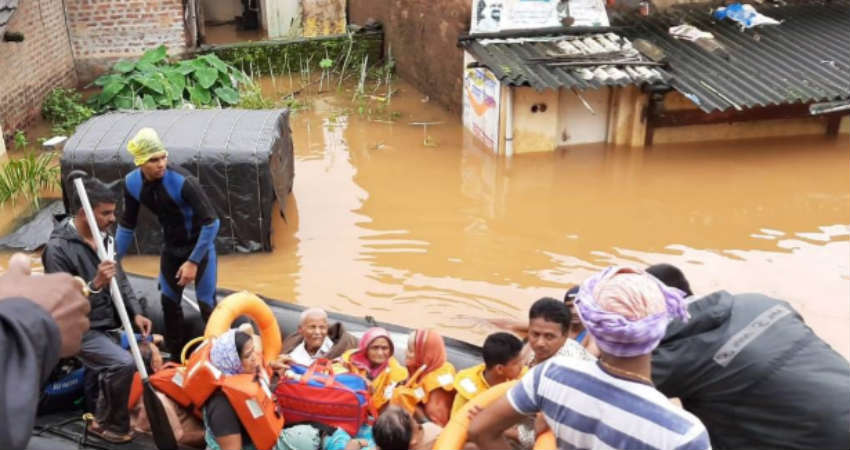 Flood fury is still continuing in Maharashtra. As on Saturday, nearly 30 people lost their lives, while 10 were reported missing in Pune.

More than four lakh people were moved to safer places in the five districts of Pune division. Over 200 roads and 94 bridges have been closed due to widespread flooding and subsequent landslides.

Updated on Aug 9, 09:15 PM: NDRF team rescues a man from  Sangliwadi stuck on a tree since last three days

As rains continue to be heavy over the western parts of Maharashtra, rescue operations too have been going on a large scale. Lakhs of people affected by floods have been rescued by NDRF and several other organisations so far. In this regard, a man from Sangliwadi who apparently was stuck on a tree since the last three days has been rescued now.

Death toll due to Maharashtra floods has risen to 29 in Solapur, Sangli, Satara, Kolhapur and Pune, whereas, 6 remain missing. On the other hand, 2.85 lakh people have been evacuated to safer places

Updated on Aug 9, 6:20 PM: 34 teams rescue teams are working in flood hit Kolhapur, while 36 are helping out in Sangli. Now, the Indian Air Force is dropping food packets in flood-hit pockets of Maharashtra

Updated on Aug 9, 3:45 PM: Rescue measures are on in rural as well as in city areas and people are being evacuated from the affected areas. 12 Navy teams will be deployed today in Sangli in addition to the teams already present in Kolhapur,

Updated on Aug 9, 2:15 PM: NDRF has distributed packets of biscuits in Bhilawadi town of Sangli in Maharashtra

Published on Aug 9, 2019 11:25 AM: Heavy rains in many parts of Maharashtra, particularly Kolhapur ans Sangli in the past few days, have made life miserable for the residents. In fact, from a highway, only rooftop and trees can be seen which means that the road to Kolhapur can hardly be seen now.

Some pictures from Kolhapur have come in which show that almost every building visible from a flyover nearby are submerged in at least 10 feet water. Not only this, no vegetables, fuel and other supplies can reach residents because trucks are being stopped at least 30-40 km away.

Kolhapur floods have claimed 4 lives and around 97 thousand people have been shifted to safer places by the NDRF. Close to 4000 homes have suffered destruction. In fact, in view of Maharashtra floods, death toll has now reached a whopping 27.

Rescue operations are underway in full swing by the NDRF, Indian Navy, Indian Coast Guard and Indian Army in both Sangli and Kolhapur.

23 villages in Kolhapur have been affected while 18 are completely submerged. Union Home Minister Amit Shah has assured CM Devendra Fadnavis of all help possible.