Monsoon 2018 arrives in Karnataka with a bang 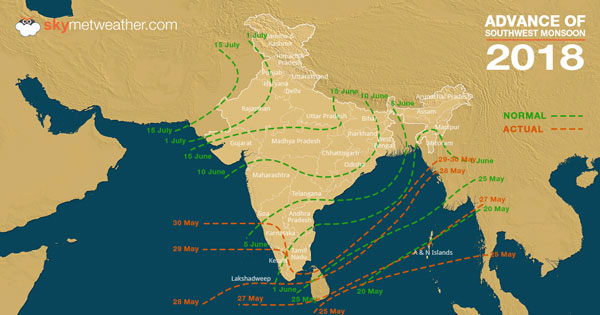 With good rain and thundershowers going on over northeastern parts of the country, the weather conditions are now favourable for the eastern arm of the Monsoon to make onset into some states of Northeast India like Nagaland, Manipur, Mizoram and Tripura in the next 48 hours.

Now, with the well-marked low in Arabian Sea getting less marked, western arm of Monsoon would now take some time to progress. But with another cyclonic circulation likely to form in Bay of Bengal, Monsoon would move in another 48-72 hours and cover some parts of South Peninsula. The likely system would increase rainfall over interior Tamil Nadu, Andhra Pradesh and Telangana.

Not only this, system would also be responsible for taking Monsoon to central and western parts of the country including Mumbai. 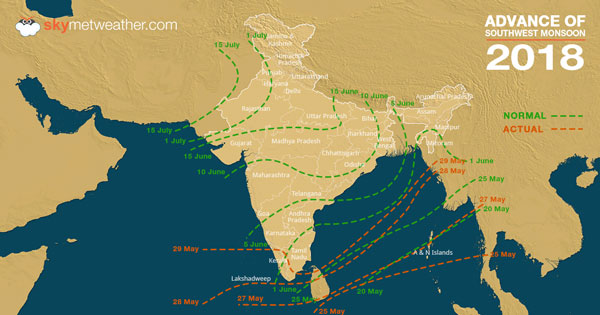 Southwest Monsoon 2018 has finally made onset over Indian mainland of Kerala on May 28. As predicted by Skymet Weather, it was a powerful onset with the Monsoon surge covering most parts of Kerala at one go.

Besides this, it has now covered remaining parts of Southeast Arabian Sea, Comorin­Maldives area, entire Lakshadweep Islands, some parts of Tamil Nadu and some more parts of southwest, central and northeast Bay of Bengal.

With well-marked low pressure area in Arabian Sea, conditions are favourable for further progress of Southwest Monsoon. In next 24 hours, it is likely to cover some parts of Kerala and remaining parts of central Arabian Sea, some parts of coastal and South Interior Karnataka, some more parts of east-central and northeast Bay of Bengal. 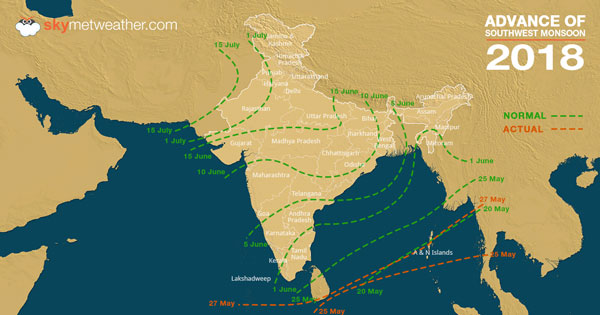 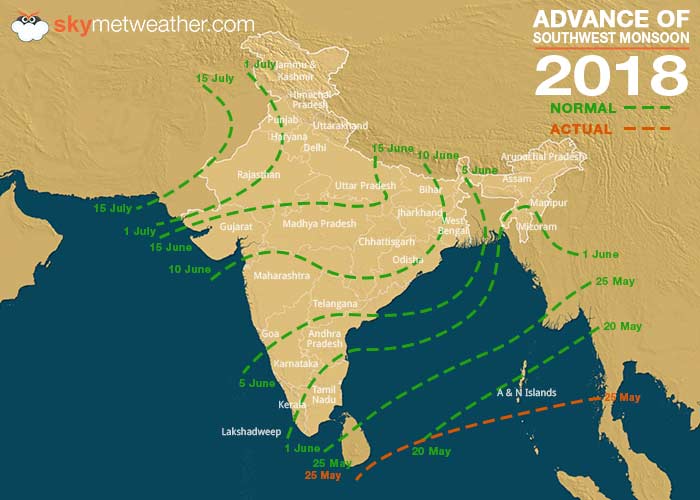 The much-awaited Southwest Monsoon 2018 has finally arrived over some parts of Southeast Bay of Bengal, South Andaman Sea and Nicobar Islands. The Northern Limit of Monsoon (NLM) is currently passing through latitude 5°N and longitude 80°E, 8°N and 87°E, Car Nicobar and 11°N and 99°E.

The arrival of the four-month long season has been slightly delayed by almost three days. Blame it all on Cyclone Sagar and Mekunu that had kept the Monsoon 2018 waiting till now.

It will take about 3-4 days from the current position for the Monsoon to strike Kerala. This means that the onset would be earlier than the official date of June 1, which corroborates Skymet’s prediction made in its Monsoon forecast 2018.
Not only this, we expect Monsoon 2018 to make a forceful onset over Kerala, with moderate to heavy rainfall likely at many places.

As per weathermen, the persisting cyclonic circulations over Arabian Sea and Bay of Bengal will become more marked soon, making way for the further advancement of Monsoon over more parts of Bay of Bengal and Arabian Sea that includes Sri Lanka and Kerala.

Subsequently, these features are building up the scenario for the further advancement of Monsoon over Kerala, Karnataka, Tamil Nadu and rest parts of Peninsular region. This would include major cities of Chennai and Bengaluru.

Weather on Twitter
On February 24 and 25, we expect fairly widespread rain and thundershowers in West Bengal, #Odisha and #Jharkhand.… t.co/P4c5Us2EqF
Scattered rain and thundershowers are expected to continue in East #MadhyaPradesh and #Chhattisgarh until February… t.co/kYuwxCvHZ5
#Rain and snow will commence in #JammuandKashmir, #Ladakh, #HimachalPradesh, #Uttarakhand on February 28. On Februa… t.co/mr0Ak4v8A9
Light rain and thundershowers are expected in #Uttarakhand, parts of Northwest #Rajasthan and Southwest #Punjab on… t.co/IVWxsVVOBM
Let us take a look at the #weatherforecast for the week. t.co/6GDd7yj8HS
Good #Rain and thundershowers are likely in Odisha and #WestBengal. The intensity is likely to be more in #Odisha a… t.co/S2ideLNDaO
सोमवार को देश के मैदानी भागों में सबसे ठंडा स्थान रहा हरियाणा का करनाल शहर। जहां न्यूनतम तापमान 9.0 डिग्री सेल्सियस… t.co/RtQsjW9aJe
अगले 24 घंटों के दौरान झारखंड और छत्तीसगढ़ में कई जगहों पर हल्की से मध्यम बारिश के साथ कुछ स्थानों पर भारी बारिश हो… t.co/P8TUJmiBxl
During the next 24 hours, light to moderate rain and thundershowers with isolated heavy spells may occur in #Odisha… t.co/3sxXjleNrv
On February 25, President Trump is scheduled to visit #Delhi. The weather conditions are expected to be similar to… t.co/6yg7sLDiic
Follow us @skymetweather