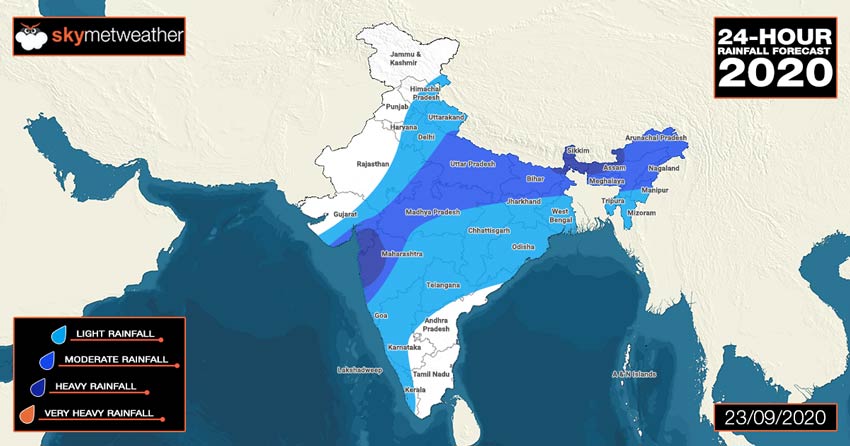 The low pressure area is now over interior Odisha and adjoining area and associated cyclonic circulation is extending up to 7.6 kms above mean sea level.

The monsoon trough is now passing through Bikaner, Jaipur, Guna, Jabalpur Pendra Road and then to the center of low pressure area over North interior Odisha.

The east-west shear zone is roughly along latitude 17 degrees north.

The cyclonic circulation over North Maharashtra Coast and adjoining area is persisting in lower levels.

During the last 24 hours, heavy monsoon rains have been observed in the cities of Goa and southern coastal Maharashtra. Coastal Karnataka also received moderate to heavy rainfall at many places.

Light to moderate rains was recorded over parts of West Bengal, Assam, Meghalaya, Odisha, parts of Chhattisgarh, Jharkhand. Also, there have been rains at many places in Kerala, Telangana, and East Madhya Pradesh.

Southwest Monsoon forecast for the next 24 hours:

During the next 24 hours, moderate to heavy rain or thunderstorms are possible over Northeast India, West Bengal, Bihar, Jharkhand, Konkan and parts of Goa, and Madhya Pradesh.

Light to moderate rains with one or two heavy spells may occur at some places in eastern and central parts of coastal Karnataka, northern Chhattisgarh, Uttar Pradesh.

Light rain is possible in parts of Punjab, Himachal Pradesh, and Tamil Nadu.