The month of June 2020 ended rain surplus recording 196.2mm against the normal of 166.9mm. The excess of 18% is the highest since June 2013 when it recorded 219.8mm and a surplus by 34%. The central parts of the country were the rainiest with an overall surplus of 31% and the largest contribution comes from Madhya Pradesh and Chhattisgarh. Bihar had the distinction of being the rainiest state, an extremely rare feat, with a huge surplus of 82%. Mizoram was the poorest of all with a whopping deficiency of 55%.

The normal rainfall figures were revised for the monsoon season and individual month as well from 2019 onward. Average rainfall for June earlier stood at 163.5mm and the revised figures take it up to 166.9mm. June 2020 has been the fifth rainiest since 1981 and the strongest June during this period was in 2013 followed by 2008. 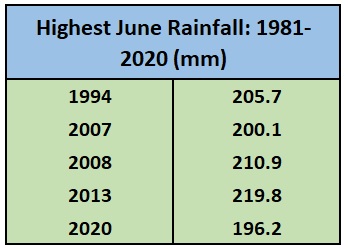 The monsoon performance in June does not have a strong correlation with seasonal performance. The year 2019 monsoon is a proven testimony to stretch from drought deficit June (-32%) to seasonal excess of 110%. The variability of rainfall in June remains large and may not be upbeat as of now for the season. Surely the Kharif prospects are promising at the back of bountiful June rains. 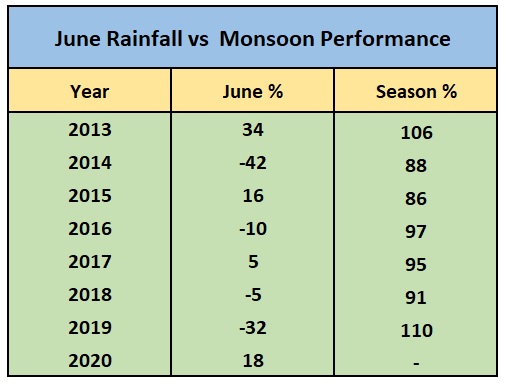 July and August are the core monsoon months and contribute 70% of seasonal rainfall. Space and time distribution of monsoon rainfall during this period is very crucial for agricultural prospects and water storage & conservation for the coming months.

Weather update and forecast for July 2 across India

Heavy downpour over many parts of Mumbai and Suburbs, rainy week ahead for Mumbai