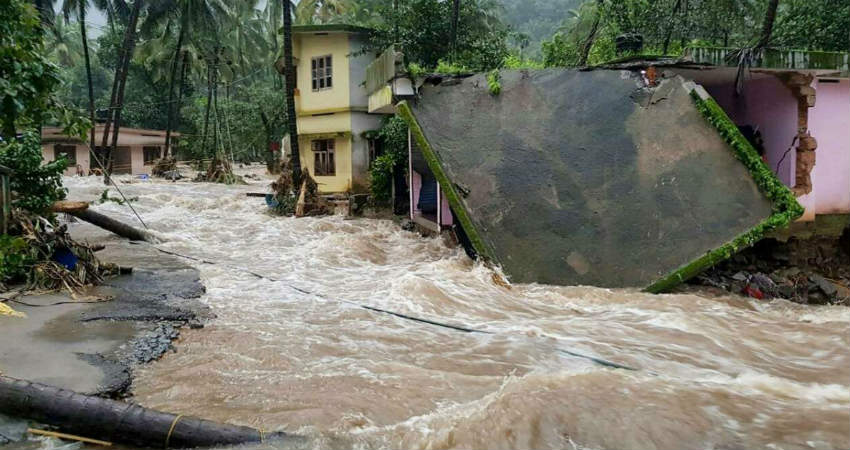 The much-anticipated Monsoon rains have again started lashing Kerala. The state has been recording heavy to extremely heavy rains since yesterday and this activity will continue for at least the next three days. Skymet Weather is monitoring very closely the rainfall activity in the state and also, we are disseminating the information about the same at regular intervals. There are chances that these torrential rains might trigger a flood situation.

Kerala has a dense network of Automated Weather Stations of Skymet providing accurate weather information. For instance, our AWS in Aluva tehsil in Ernakulum district has recorded 61.2 mm of rains while in Chalakudy tehsil in Thrissur the rainfall amount recorded was 56.65 mm. Looking at the satellite pictures, there is dense clouding in the state. Two weather systems can also be seen, one is the off-shore Trough in the West coast running from South Konkan up to Kerala and the other is a Cyclonic Circulation over Northwest Bay of Bengal and adjoining parts of Odisha and Andhra Pradesh. This Circulation has now induced a Low-Pressure Area which is marked over North Andhra Pradesh, South Odisha, and adjoining Bay area. The combined effect of these weather systems has accelerated the amount of rainfall in Kerala as they have brought in a huge amount of Monsoon surge and cloud mass.

Rains have been recorded in Alappuzha and Punalur in the South, going up to Cochin and then further up to Kozhikode as well as the interiors of the state. Three-digit rainfall amount has been recorded at several places in the last 24 hours. Kozhikode, Karipur, Cochin, Alappuzha, Punalur and Kannur have recorded 150 mm, 118 mm, 116 mm, 97 mm, 57 mm and 85 mm of rains, respectively.

According to meteorologists, this spell of prolonged heavy rain would affect all the dams and reservoirs which possibly may aggravate the fear of floods in Kerala. There is a high probability of some places recording rainfall amounts of more than 500 mm.