Storm Fani to become a severe cyclone by Sunday, second since 1891 in April 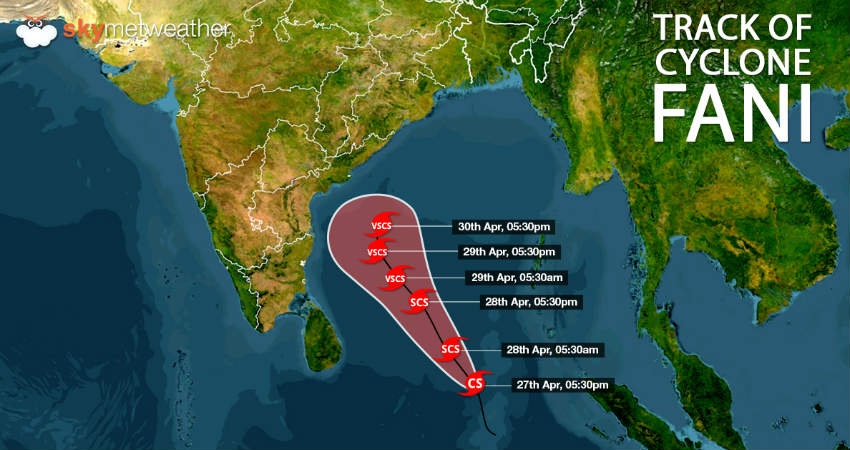 Cyclone Fani is the maiden tropical storm of 2019 for Indian seas that made an appearance on Saturday evening or late night. But that is not all, system is showing signs of intensification and may become a severe cyclonic storm as well by Sunday itself. If this happens, it would be the second storm since 1891 in Bay of Bengal to become a severe cyclone.

Before this, Cyclone Mala that formed on April 25, 2006 was the only storm that had attained the status of extremely severe cyclone. Other than this, we have seen only 11 cyclones in the month of April.

As per weathermen, we rarely see any cyclonic storms brewing in Indian seas during the first half of April but even the second half of April have not seen big numbers.

At present, the system which was seen as a deep depression over Southeast Bay of Bengal and adjoining Equatorial Indian Ocean, has now intensified into a cyclonic storm on Saturday afternoon. It is presently centered at Latitude 5.4°N and Longitude 88.5°E, about 870 km east­-southeast of Colombo, Sri Lanka, 1200 km southeast of Chennai and 1440 km south­southeast of Machilipatnam.

The system is travelling in very conducive environment and thus is likely to intensify into a Severe Cyclonic Storm during the next 24 hours.

By this time, the system would track northwest off Sri Lanka coast during next 72 hours and would start affecting the weather over coastal areas of Tamil Nadu and south Andhra Pradesh by April 29 or 30.