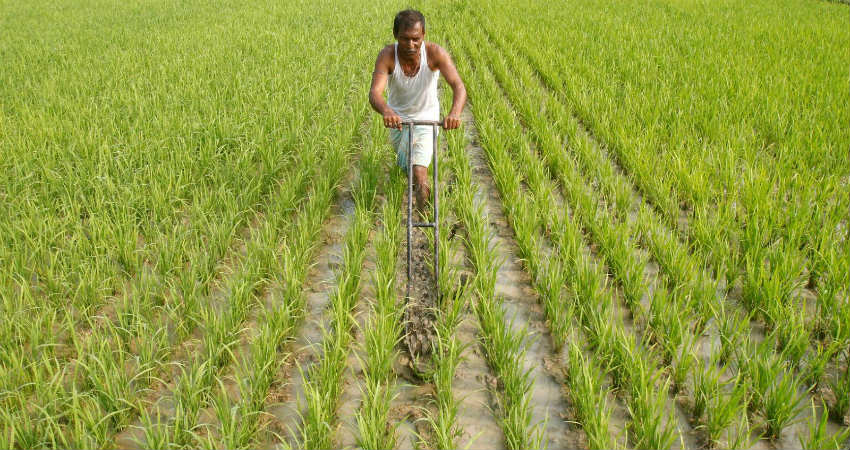 India is prone to various kinds of hydro-meteorological and geological hazards, especially droughts, earthquakes, floods, tsunamis, cyclones and landslides. These hazards threaten millions of lives and can cause large-scale losses to people, to the infrastructure and to the economy. Accurate weather predictions at the right time can go a long way in mitigating, if not in eradicating this crisis. This is where the USAID - Skymet partnership comes in. In India, the United States Agency for International Development (USAID) is collaborating with Skymet Weather Services Private Limited (Skymet) for a project on “Partnership in Climate Services for Resilient Agriculture in India” (PCSRA). It aims to digitalize the archaic methods still employed by the Indian farmer and develop new risk mitigation products through weather forecasts, agro-advisories and insurance facilitation. In the past four years, the project has benefited more than 80,000 farmers spread across 31 districts in 9 states of India- Andhra Pradesh, Telangana, Bihar, Gujarat, Haryana, Madhya Pradesh, Odisha, Punjab, and Rajasthan.

The project is enabling farmers and vulnerable agricultural communities in rural areas to cope with climate variability and make informed decisions by providing them with hyper-local weather information. To realize this goal, 675 AWS (Automated Weather Stations) have been installed to generate real-time weather and crop monitoring data to extrapolate weather parameters in the near term. A striking feature of the project is its technological and digital platforms that connect even remotely located beneficiaries to a set of digital services, which they can use to become more resilient towards weather variability. This permits the Indian farmer to make time-sensitive decisions regarding the use of appropriate varieties of crops, irrigation, pesticides, fertilizers and the like. 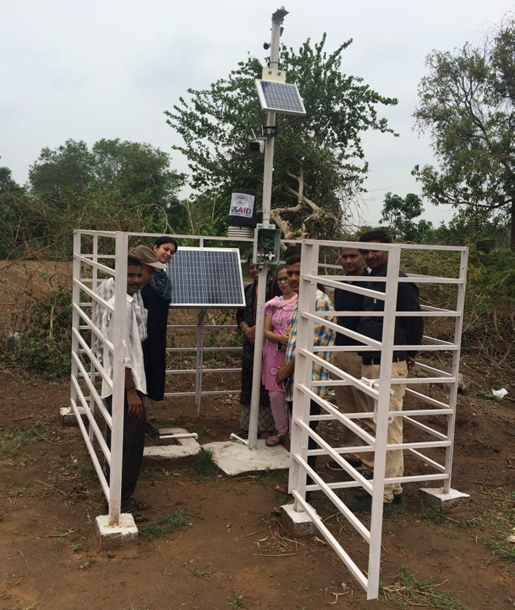 Skymet has developed two android based applications -“SkyGreen” to register farmers and “SkyMitra” to deliver services in the form of information on the mobiles of registered farmers. SkyMitra is a farmer-centric application that gives real-time weather information on an hourly basis, weather forecasts for the next 7 and 15 days, and agro advisories based on real-time live weather. Besides the SkyMitra app and WhatsApp groups, information is also shared through other mediums. 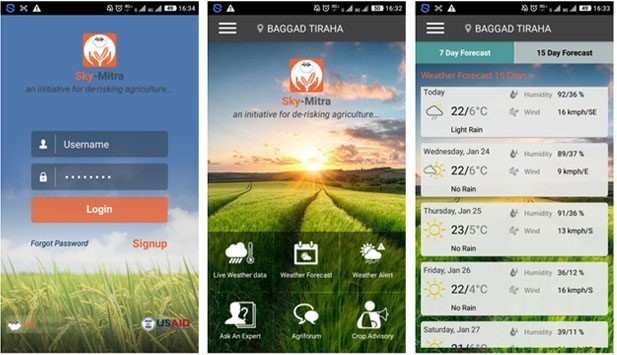 A majority of Indian farmers do not have a smartphone. Hence, weather forecasts, weather alerts, and agro-advisories are sent to the farmers through SMS in 6 regional languages, twice in a week. Weather Display Boards are placed in high visibility locations in villages to reach out to farmers who do not have access to mobile phones. Weather display boards are updated every day in the morning to provide information on five to six weather-related parameters that are useful for farmers. The most accurate and the most detailed of weather forecasts and agro-advisories do not count if they do not reach the farmer in the remotest locations, with little to no literacy skills. Through VBS (Voice Broadcast Services), weather information is disseminated to the registered farmers in six regional languages in the form of voice messages. Farmers can also call on a toll-free number by dialing the pin code of their district to hear district-specific weather information.

Most Indian farmers find it difficult to access information on scientific methods of farming. To bridge this information gap, the project is working with multiple stakeholders in the agricultural ecosystem to develop a “community of practice” wherein farmers, scientists, and village level functionaries come together to share their experiences and discuss the most productive or resilient farming techniques. 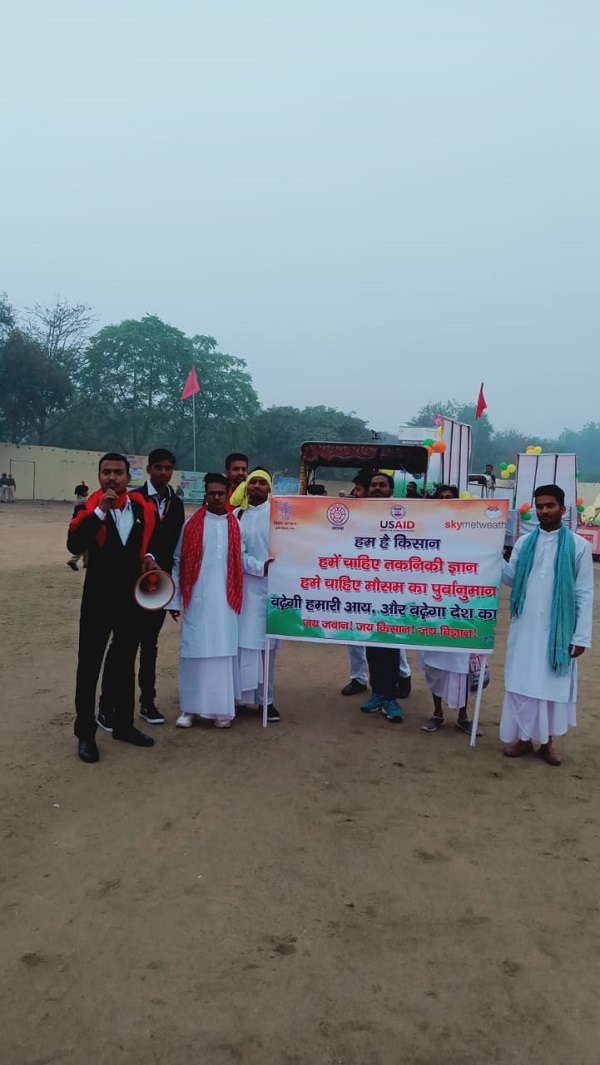 Gender disparity is not a new or shocking event in India, as unfortunate as it may sound. Women in the capacity of wife or daughter help out in the fields but their labour goes mostly unpaid and unacknowledged. According to Oxfam (2013), around 80 percent of farm work is undertaken by women in India. However, they own only 13 percent of the land. Recent statistics released by the University of Maryland and the National Council of Applied Economic Research (NCAER, 2018) state that women constitute over 42 percent of the agricultural labour force in India, but own less than two percent of farmland. Female agricultural labourers, farm widows, and tenant farmers are left bereft of recognition as farmers, and the consequent entitlements. This exclusion from rights and entitlements makes the Indian woman farmer a conspicuously absent figure. The Skymet-USAID partnership seeks to address this disparity in its own way. Socio-cultural barriers often make it difficult to enroll women farmers. Although the share of female farmers is just 10% of the total enrollments, it is three times more when compared to the total farmer registered since the inception of the project. To encourage the participation of women farmers, the project team conducts separate meetings for women and organizes meetings at a time which is more convenient for them. In our experience, meetings held in the evenings have witnessed a higher turnout as women farmers who are engaged in housework or fieldwork during the day, are able to participate in these meetings and discussions. 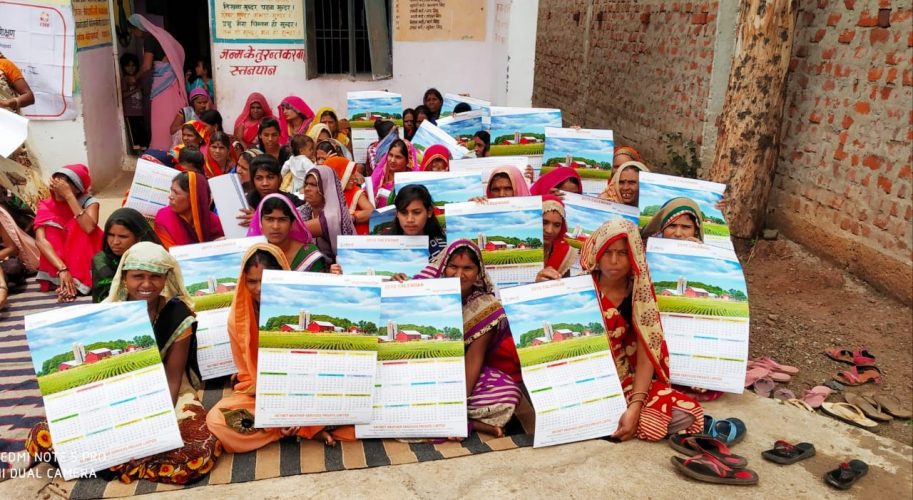 India is a study of dizzying contrasts. It’s hard to imagine that the country credited with launching the highest number of satellites in a single mission is also the country with almost 31 million homes with no electricity. This perplexing gap is the startling reality of our country. The disconnect between technological progress and technological impact needs to be bridged in order to metamorphose from a ‘developing’ to a ‘developed country’. Increasingly, accurate weather forecasts will not facilitate agriculture if the right information does not reach the right person at the right time. This is what sets the project apart. With its grassroots approach and use of digital technologies, the Skymet - USAID partnership aims to make locations specific weather predictions and insurance information accessible to farmers. And this is precisely what digitalization is all about- making the maximum impact on the maximum number of people.