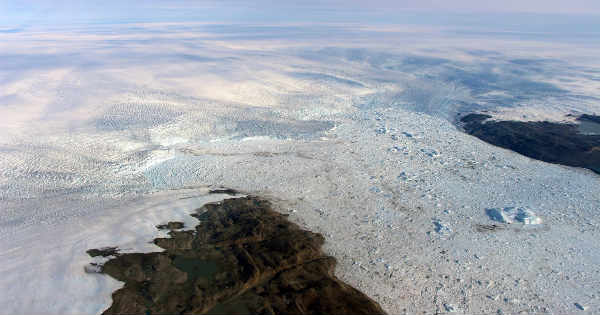 The Greenland glacier Jakobshavn Isbrae is massive, at around 40 miles long and more than a mile thick. It's famous among glaciers as it was the source of the iceberg that sunk the Titanic. However, it's responsible for more icebergs than that.

In a recent study by NASA, this Jakobshavn glacier was one of the fastest shrinking ice and snow masses on Earth which is growing once again. Around 2012, this glacier was retreating about 1.8 miles and kept on thinning near to 130 feet annually.

As per Nature Geoscience, these changes are due to concurrent cooling of ocean waters in Disko Bay that spill over into Ilulissat Icefjord, both situated on the western coast of Greenland.

Lead author Ala Khazendar, a NASA glaciologist on the Oceans Melting Greenland (OMG) project mentioned that a natural cycling cool of North Atlantic waters likely caused the glacier to reverse the course. He also mentioned that the water in Disko Bay, where Jakobshavn hits the ocean, is about 3.6°C cooler than a few years ago.

This a good news may be short lived. NASA’s climate scientist Josh Willis said that ocean temperature is a bigger player in glacier retreats. About 90% of the heat trapped by greenhouse gases goes into the oceans. Since more than 10 years, the water has been and will continue to warm via man-made climate change.

Khazendar said that the natural North Atlantic Oscillation is like jumping down a few steps or jumping up a few steps. The water can get cooler and have effects, but if in the long run it gets warmer, then the melting will be worse.

The North Atlantic Oscillation is a weather phenomenon in the North Atlantic Ocean of fluctuations in the difference of atmospheric pressure at sea level between the Icelandic Low and the Azores High (North Atlantic High). It is like a distant cousin to El Nino in the Pacific.