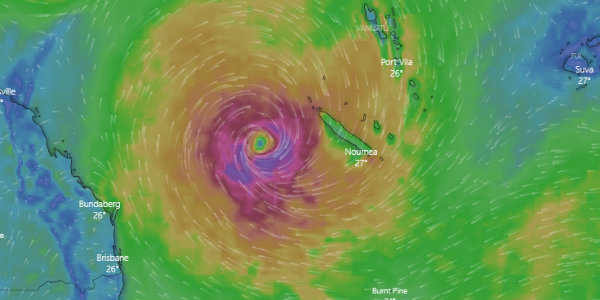 Cyclone Oma has weakened into a CAT 2 storm, but the system is moving towards the Queensland Coast of Australia. The system will not only bring damaging rainfall over many parts of Australia but also ferocious winds along with it.

Today, Oma is located even less than 1000 km from Brisbane and is moving towards Queensland at the speed of 10 kmph.

A flood warning has been issued for catchment areas in the coastal regions along with a few interior parts between New South Wales border and Gladstone to prepare them for heavy showers in view of Cyclone Oma.

The Cyclone’s expected path remains uncertain, but the landfall of Oma is likely around the weekend only. The storm may linger off the coast only. High tides and hazardous conditions for surfing are already being observed.

The longer the storm lingers, the more damage it is likely to cause as waves as high as six metres have been seen along the shore. Inland areas which are drought stricken may benefit from the rain Oma brings with itself.

Sand stock is in place for Gold Coast as it prepares for the storm to affect in the coming days. In fact, high swells have already caused flooding in the coastline.  Weather warning continues for areas right from the New South Wales Border to the Fraser Coast.

If the cyclone continues to follow the current track, winds of up to 90 kmph may affect some coastal along with daily rains of about 30 cm. Flooding along with abnormally high tides will be a common sight for coastal parts.

Wednesday morning had forecasters downplay the cyclone threat but as the Cyclone changed tracks suddenly, damage potential has increased.

Swimmers, fishers and boaters in Queensland have been warned to stay away from the waters for at least until the weekend is over.