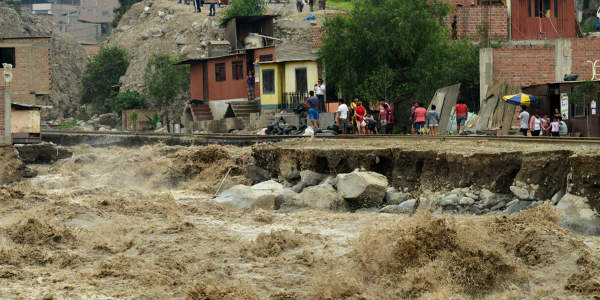 Peru has been battered by a series of floods in just a matter of one month. Flooding episode began on February 27, while the second wave was on March 7. Once again, the Amazon region of Peru has been throttled by severe flooding and the notorious El Niño is to be blamed.

The Severity of floods has been such that many casualties have been recorded. During the first wave of floods, at least 50 were seen to be dead.

Peru is a north south oriented country and stretched in length with several rivers as well as water bodies.

Torrential rains cause swelling of the water bodies which furthermore cause flooding in many parts on. March 7. Rivers overflew, particularly the Tumber river causing landslides, mudslides etc.

The third wave of Peru floods has seen 51 people dead while 13000 have been displaced, and hundreds injured. Streets were seen turning into rivers in Iquitos causing children to paddle in buckets for navigating the streets. Moreover, in a least 650 districts, a state of emergency declared. In fact, rainy weather will continue in the next week as well.

What caused it, as mentioned before, El Niño is to be blamed. Pacific temperatures at present are on the rise. Starting December, rise was seen while some respite was seen from mid-January to mid-February where they did decline.

However, since the last week of February, they have once again been rising, and an increase of more than a degree has been seen.

The Nino Indices are measured to assess the scale of El Niño, and the latitude where it is measured in the Pacific, passes through and through Peru. During this time, the Sea Surface Temperatures (SST) and beyond increase due to which the economy directly gets affected. The economy is mainly dependent of fish. Due to excessive temperatures, these fishes die as they are unable to survive under such high temperatures.

There is a lot of humidity in that region and whenever El Niño conditions are present, deep cloud formation takes place due to presence of humidity and high temperatures. Thus, Peru sees heavy rainfall activity then.

For now, no relief in sight, these conditions will continue. Rains will spill over to the next week as well. Moreover, the warming of the Pacific will also continue which only sounds like trouble for the people in Peru.