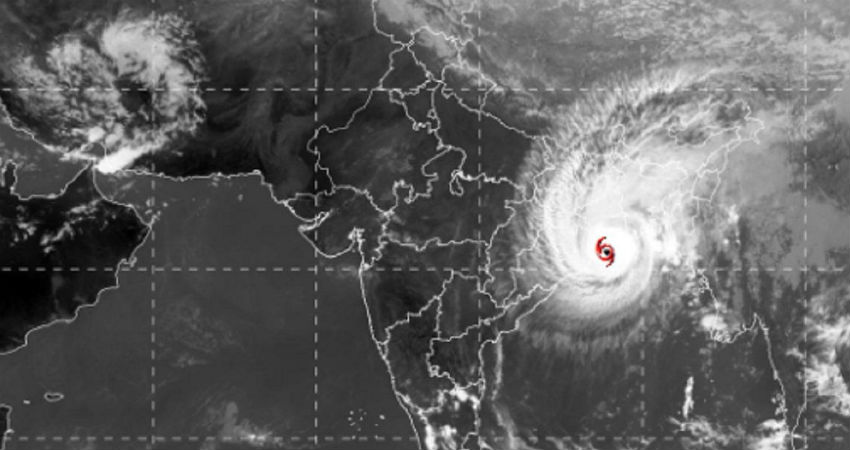 The Cyclonic Storm Bulbul over coastal Bangladesh continues to move over land in east-northeast direction. The system has been loosing its strength all through its journey inland. In fact, cloud configuration indicate that Bulbul has already weakened into a deep depression. In fact, Bulbul would further weakened into a Depression by tonight.

Rains have reduced significantly over West Bengal but light to moderate rainfall are likely to continue over North & South 24 Parganas, East Medinipur and Nadiya districts. Light to moderate rains are also likely at many places of South Assam,  Meghalaya, Tripura, and Mizoram during next 24 hours.

Updated on Nov 10, 9:00 AM: Bulbul kills 1 in Kolkata, weakens into Cyclone after landfall

The Very Severe Cyclone Bulbul made a landfall over Indo-Bangladesh coast on Saturday night at around 8:30 pm yesterday night with a maximum wind speed of 110-120 km per hour gusting up to 120 km per hour. At present, it continues to move in Northeastward direction.

Bulbul brought in very heavy rains all along the Indo-Bangladesh coast along with strong winds. Even the capital city of Kolkata had to bear the brunt of the cyclone with heavy rains and winds gusting to the tune of 50-70 kmph and three digit rains at the Dum Dum Airport. In the last two days the city has recorded very heavy rains.

As of now, one casualty has been reported in Kolkata due to the storm. A 28- year men lost his life when an uprooted tree fell on him. All flights leading to Kolkata Airport were diverted until 6 am today.

Also, around 100,000 people have been evacuated from low-lying coastal villages and islands in Bangladesh. Now, the threat for West Bengal is over as the Cyclone has weakened and will become a deep depression soon, moving towards Northeast India.

Northeast India is expected to get some rains as the system weakens and moves towards the region. However, rainfall will not be hefty there as well.

Cyclone Bulbul finally made landfall over Indo-Bangladesh coast on Saturday night as severe cyclonic storm. Bulbul had crossed the coast abeam Sagar Islands and continues to track northeastwards. According to weathermen, the landfall process has finally finished and Bulbul is now travelling over the land towards Bangladesh. Landfall process takes about two hours to complete.

The storm was accompanied with torrential rains and high velocity winds to the tune of 110-120 kmph gusting up to 130 kmph.

As reiterated, the next 6 to 8 hours continues to be crucial for West Bengal as Bulbul would take another six hours to weaken into Cyclonic Storm after crossing coast. Thus, next 12 hours will be crucial. Storm surge will be from 8 to 10 feet that would lead to inundation in the low lying areas.

Lightning strikes are to be watched out for, which may be damaging. Coastal areas of West Bengal inclusive of Digha, Howrah, Hooghly, 24 Parganas, Medinipur are witnessing winds in excess of 100 kmph while Kolkata winds were in excess of 70-80 kmph.

Moving northeastwards further, it would head for the northeastern states of India as a depression. However, this would be not before Sunday morning.

Bulbul has already crossed abeam Sagar Islands with the peripheral clouds reaching the coast. Thus, the landfall process for Severe Cyclone Bulbul has begun. The landfall is a two hour process.

More rains are coming up for Digha, Howrah, Hooghly, 24 Parganas, Medinipur with winds in excess of 100 kmph. The city of Kolkata will also see winds of 70-80 kmph.

Extremely heavy rains are likely with damaging lightning strikes. The next 6 to 8 hours will remain crucial as Bulbul after crossing coast will weaken into Cyclonic Storm, which will take six hours.

Updated on Nov 9, 8:25 PM: Bulbul has now weakened into a Severe Cyclone as it gets very close to the coast. In fact, the peripherals of the storm is already touching Sagar Islands and the landfall will begin very soon. It will take about two hours for the eye to cross the land.

Gale force winds, very heavy rains and storm surge of about 8 to 10 feet will be seen as the storm makes landfall. Residents are advised to exercise caution and stay safe.

Updated on Nov 9, 8:00 PM: Bulbul has weakened into a Severe Cyclone and is expected to make landfall anytime now. In fact, the storm is all set to bring very heavy rains, Gale force winds over many parts of West Bengal.

Updated on Nov 9, 7:45 PM: More than 1.2 lakh people have been evacuated from coastal areas of West Bengal as Cyclone Bulbul all set to make landfall.

Very Severe Cyclone Bulbul is all set to make landfall anytime soon keeping West Bengal and Bangladesh on alert. The storm is centered at Latitude 21 °North and Longitude 88 °East about 70 km South southwest of Sagar Islands, 175 South Southwest of Kolkata and 260 km of Khepupara.

Very Severe Cyclonic Storm Bulbul is currently near Latitude 20.9°N and Longitude 87.9°E, 90 km south-southeast of Digha. The storm is expected to weaken a little and become a Severe Cyclone at the time of landfall. It will make landfall over the coasts of West Bengal and Bangladesh between the Sagar Islands and Khepupara tonight.

Heavy rains have already occurred in many parts of Odisha yesterday and today, West Bengal has been seeing heavy showers with Dum Dum Airport in Kolkata recording 45 mm of rains in six hours' time. More showers are coming up.

As of 0830 hrs IST of today morning, the Very Severe Cyclonic Storm Bulbul lies centered over Northwest and adjoining West-central Bay of Bengal, near Lat.20.4°N and Long. 88.0°E about 285 km south of Kolkata, 110 km east-southeast of Paradip (Odisha), 190 km south-southwest of Sagar Islands (West Bengal) and 340 km South-southwest of Khepupara.

The system is likely to move northeastwards while weakening gradually, and cross West Bengal – Bangladesh Coast between Sagar Islands and Khepupara (Bangladesh), across Sunderban delta by late evening or night today i.e. November 9 as a Severe Cyclonic Storm. Winds to the tune of 110-120kmph gusting to 135kmph are likely to blow over the region.