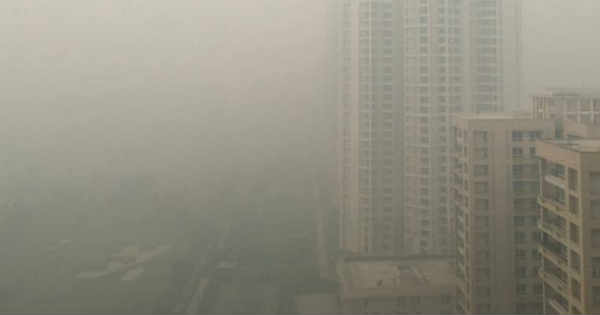 The air quality has once again entered the ‘severe’ zone on Monday, December 24. It was earlier in ‘very poor’ category but the situation has now become worse and has once more touched the mark of severity. According to the Central Pollution Control Board (CPCB), air quality index (AQI) showed a 'severe' level of 446 recorded today at 11 a.m. On the other hand, System of Air Quality and Weather Forecasting And Research (SAFAR), recorded the overall AQI at 460.

The chief meteorologist at Skymet Weather, Mr. Mahesh Palawat said that the reason for sudden spike in pollution levels can be attributed to a feeble Western Disturbance over North Pakistan which has induced a Cyclonic Circulation over Northwest Rajasthan and adjoining Punjab and Haryana.

The winds have also changed their direction and are currently blowing from south-east direction. The nature of winds is very light to calm. Although, due to this the minimums have increased by 1-2°C and simultaneously it has aided in increase in pollution levels. We do not expect any relief for the coming two days and winds will continue to remain light. Post that, the direction of winds will once again change and will start blowing from north-west and thereafter lead to dip in minimums.

Since the air quality is extremely hazardous and not fit for human breathing, the Delhi environment ministry on Sunday instructed the Delhi Pollution Control Committee to track the areas that are vulnerable to high pollution and keep a watch on violations. Experts say that the 'severe' air quality level makes breathing hard even for healthy people.

As prolonged exposure to PM2.5 can lead to hazardous health conditions like cancer and stroke, CPCB has advised people to avoid using private vehicles and minimize outdoor activities for the next few days, especially for those people who have respiratory illnesses.

In a meeting, Environment Pollution Control Authority was recommended to boost their ground actions to implement safety measures to control emissions from vehicles and burning of biomass. Concerned agencies were advised for intensifying water sprinkling and mechanized sweeping. The maximum temperature on Monday was 21.4°C and minimum temperature was 4.6°C with 'moderate fog.