After much speculations, EL Niño has finally arrived. The Nino index of 3.4, which is the area of concern has exceeded the threshold value of 0.5°C for the required period of time.

El Niño is declared when Oceanic Niño Index (ONI), which is three months running mean of SST anomaly in the Niño 3.4 region, is higher than or equal to 0.5°C for overlapping 3 months for five consecutive episodes. The most recent ONI value JFM (January – March) is 0.8°C.

The average value of oceanic Niño Index (ONI) taken over a period of three months for the last five consecutive episodes are as follows:

Going by the latest reading by the weather models, the probability of El Niño conditions is 80% through Spring 2019. Thereafter declining but would remain as high as 60% during the summer months as well through the Monsoon months. 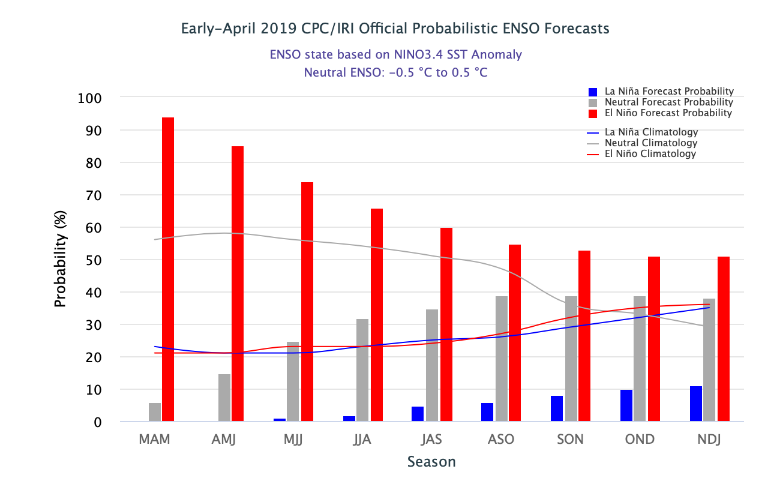 Equatorial sea surface temperatures (SSTs) continues to be above average across most of the Pacific Ocean. Although there has been a drop in temperatures but they are still well-above the threshold values.

El Niño is a dreaded phenomenon and has the power to corrupt the Monsoon rains. El Niño is invariably linked with below normal rainfall during the Southwest Monsoon. Weather models are indicating the same for Monsoon 2019 as well.

According to Skymet Weather, Monsoon 2019 is likely to see below normal rains to the tune of 93% with an error margin of +/- 5%. Core months of June and July would be the major sufferers, with rain probability of 77% and 91%, respectively. Monsoon rains contribute over 70% of the annual rainfall for India.

Heavy rains to continue over Gujarat, prolonged spell ahead

Weather update and forecast for July 08 across India