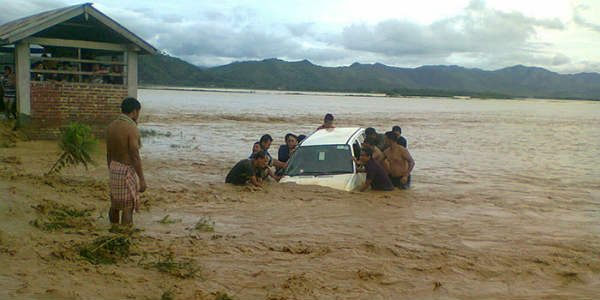 Updated on June 15, 2018: Flood situation in Manipur and Mizoram continues to be grim as moderate to heavy showers refuse to take a backseat from the states. In fact, the last 24 hours were also rainy enough with Lengpui recording 81.5 mm of rains, Aizawl 53 mm, and Imphal at 14.5 mm.

Along with the state, the adjoining areas have also been witnessing heavy rains which is further aggravating the flood situation over both these states.

The depression which had formed in the Bay crossed Bangladesh coast and was over the Tripura region. Even now, the remains of the system persist as a cyclonic circulation. The remnants of systems that persist over the region usually do not find an easy escape due to the terrain of Northeast India and also get enough moisture.

Thus, moderate to heavy rains will continue due to the persistence of the system and the situation will remain aggravated for some more time.

Since the onset of Southwest Monsoon, Manipur has been receiving good rains meanwhile these rains have become heavy in the last two days. These rains had occurred in view of the depression which was over the Bay of Bengal further crossing the Bangladesh coast. It had weakened into a low pressure and lay over the Tripura region.

The system has now become a cyclonic circulation and is persisting over the Tripura region. The capital city of Manipur, Imphal has recorded a whopping 89 mm of rainfall in the last 24 hours.

Due to these rains, and varied terrains over the adjoining areas, flooding has occurred in many parts of the state. Manipur has areas which are not as hilly and its adjoining plain portions of Assam, and Tripura have also been facing a similar situation. Rivers are already in spate and heavy rains will further add on to the flood woes. In fact, flood has also resulted in two deaths in Manipur.

A holiday has been declared for all schools, colleges and government offices in the state of Manipur. As per weathermen at Skymet, flood watch remains during the next 48 hours.

Moreover, rains are likely to continue along with which the rivers and other water bodies will keep responding after rains due to catchment areas. The state of Mizoram wherein heavy showers continue has also been facing a similar flood situation where over 500 families have been affected by flash floods and landslides.

Over 1,000 people in Lunglei and Aizawl have been sent to safer places. Along with disruption of power supply, the national highway which connects Manipur and southern Assam had been cut off due to landslides.