La Nina conditions in the Pacific Ocean and Indian Ocean Dipole over the Indian Ocean are relentlessly preserving their identity and magnitude. A common consensus is building up for La Nina to persist during the remaining period of 2022. The lowest odds for La Nina are likely to occur during the next 2 months. However, the odds still favour La Nina with a 60% chance and the remaining 40% for neutral ENSO. On the other flank, IOD continues to become increasingly negative, touching a low of -1.15°C on 14th Aug, the lowest since 2016. The low-level easterlies wind anomalies over the western and central Equatorial Pacific continue to support coupled ocean-atmosphere systems, consistent with La Nina conditions. 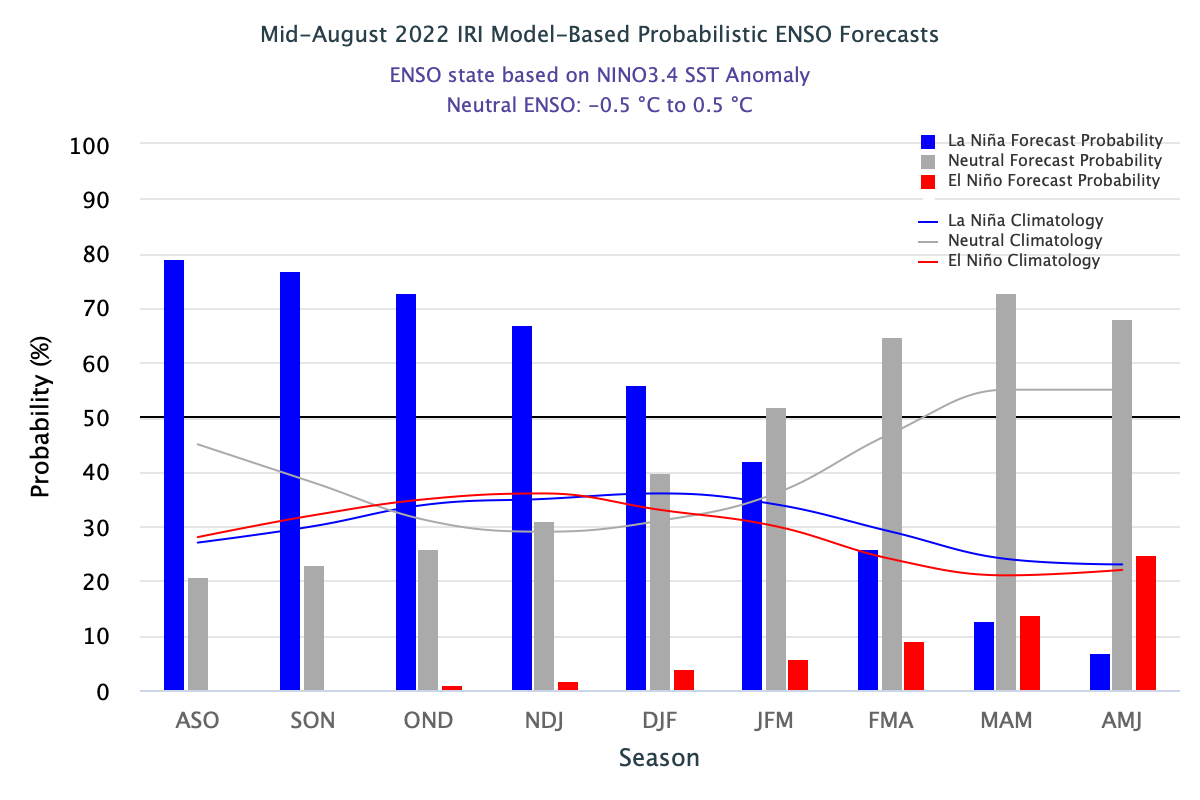 ENSO: Mid-August model-based probabilistic ENSO forecast reveals domination of La Nina during the quarterly evaluation of Oceanic Nino Index (ONI): ASO (Aug-Sep-Oct) and SON (Sep-Oct-Nov). Neutral contribution is limited to 20% and El Nino remains a non-starter. La Nina drops at the behest of rising in Neutral, during early winter and fall of the year. This behaviour is in agreement with typical El Nino/La Nina events which normally tend to develop during the period April-June and reach a peak during October-February.

The renewed cooling of the central Equatorial Pacific indicates the strengthening of La Nina conditions over the past 5 weeks. The ONI based on Sea Surface Temperature departure from average in the Nino 3.4 region registered a steady drop from -0.5°C on 11th July to -1.1°C. on 15thAug 2022. ONI is the principal measure for monitoring, assessing and predicting ENSO. 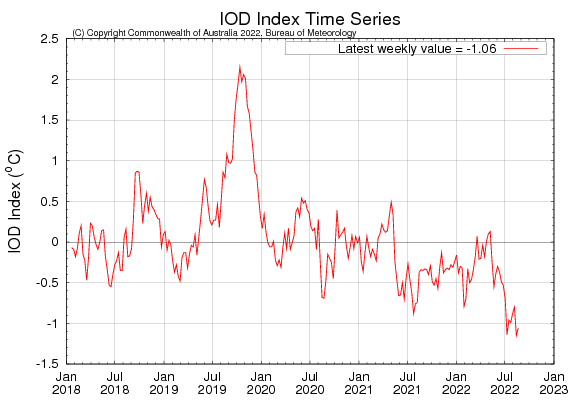 The IOD index value has been continuously at or below the threshold mark (-0.4°C), since mid-June. Negative IOD values below the threshold, triggered by the enormous cooldown of the West Indian Ocean do not augur well for the monsoon. There is a fair amount of consensus amongst the weather models for a substantial -ve IOD during September. The ensemble mean hovers around -1.1°C.

MJO: Madden Julian Oscillation remained weak for much of August. However, a renewed MJO event is likely to enhance convection across Africa and the Indian Ocean. A tropical cyclone developed over the Bay of Bengal (04B) on 19Aug. It impacted eastern and central India. 2 tropical cyclones also formed over West Pacific, last week : ( Ma-on in the Philippines Sea and Typhoon Tokage in Japan). In the coming 2 weeks, MJO is shifting from Africa (Phase 1) to the Indian Ocean (Phase 2 & 3) and further on to the maritime continent (Phase 4). MJO will have a large amplitude to start with over the Indian Ocean and will gradually reduce during the start of September.

Monsoon is entering the conclusive phase shortly. There is a tussle between La Nina and -ve IOD, both diverse in their impact, affecting monsoon rainfall. It is feared that strongly negative IOD may corrupt the monsoon rains during September. The temporal and spatial distribution of rainfall across the country may not be equitable, during this period.

Monsoon to revive over South Peninsula

Dry week ahead for Gujarat

Weather update and forecast for August 28 across India