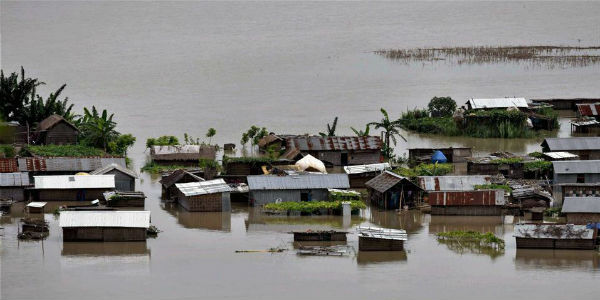 Since last many days, many districts of flood ravaged-Assam have been recording moderate to heavy showers. The massive flood situation over this state and adjoining areas has worsened further. Several parts of Assam have been witnessing heavy to very heavy rain and thundershower activities.

Reportedly, the deadly floods have claimed over 25 lives, so far.  And, we are afraid that there is no let up in the flood situation.

According to Skymet Weather, a cyclonic circulation is seen over western parts of Bihar. Along with this, moderate winds are blowing from the Bay of Bengal which is increasing the moisture incursion over western parts of Assam. Due to this, Monsoon will remain vigorous over the region and moderate rain with few heavy spells may continue to occur at many places over West Assam during the next 24 to 48 hours.

With the flood situation worsening in Assam, various roads have been blocked to prevent any further damage to civilians and properties. Approximately 500,000 people have been hit by floods in Assam as heavy to very heavy rainfall over the past 72 hours have caused deaths, landslides, blockade of highways and damaged roads and bridges at several areas across the northeastern states.

As per Skymet Weathermen, heavy to very heavy rainfall would continue to occur at several places in Assam, Sikkim, Meghalaya, Nagaland, Manipur, Mizoram and Tripura for the next 24 to 36 hours. Thereafter, the intensity of rainfall may reduce significantly over these states and some respite may usher in.