Updated on Nov 3, 2017 08:45 AM: Chennai rains have been an intense freak show during the last 24 hours. So much so that the city has witnessed a whopping 183 mm of rainfall between 8:30 am yesterday and 08:30 am today. The entire city was brought to a standstill. In fact, several areas were waterlogged and localized flooding was seen in several areas.

Moreover, many office goers were stranded on the roads due to inundated streets. In view of these heavy showers, schools and colleges will remain shut today. Not only this, IT firms have also been asked by the State Disaster Management Authority to declare holiday in IT firms.

Due to water-logging in many areas, venturing out does not seem like a good idea. While there has been a break in Chennai rains, these showers will once again make an appearance during the afternoon and evening hours. Thus, during the next 24 hours, heavy rains will occur over the capital city of Tamil Nadu.

Published on Nov 3, 2017 12:00 AM: Chennai flood scare has once again returned to haunt the people, with the state capital recording extremely heavy rains to the tune of 140 mm on span of 14 hours on Thursday.

Though on and off Chennai rains were going on since morning hours but the activity picked pace during the evening hours. In fact, rains turned heavy to very heavy around 8 pm.

Moderate to heavy rains are already wreaking havoc over the city since last four consecutive day. Though weather models were indicating moderate to heavy showers today but intensification of cyclonic circulation over Southwest Bay of Bengal and Sri Lanka into a low pressure area led to increase in rains. 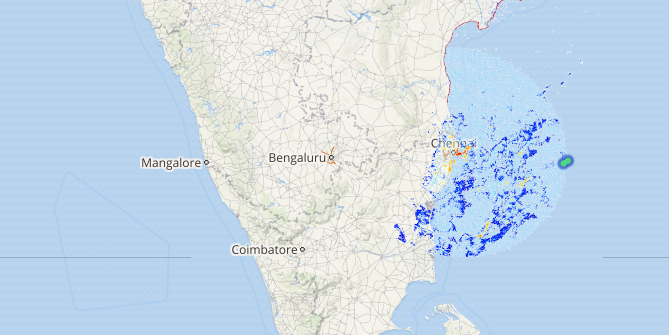 Check the live status of lightning and rain across Chennai

These rains have already brought the city to standstill, with almost all the streets water logged and roads are flooding. The current situation has unlocked the horror massive Chennai floods 2015.

In fact, we do not expect any respite from the ongoing torrential rains, at least for the next few hours. Weathermen are predicting moderate to heavy showers to continue over Chennai and nearby areas for rest of the night.

School, colleges and other institutions will continue to shut till the further notice. Locals are also advised to stay indoors and venture out only if necessary and take precautions.

Fishermen and locals are advised against venturing out along and off the coastal areas. Especially people living in the low lying areas must move to safe places.

This trio of Amritsar, Pathankot, Jalandhar are the coldest in Punjab

MD Skymet, Jatin Singh: Western disturbance to cause weather activity in the northern hills, single digit minimum temperatures to be recorded in Gujarat and Madhya Maharashtra, unseasonal rains over parts of East and Northeast India