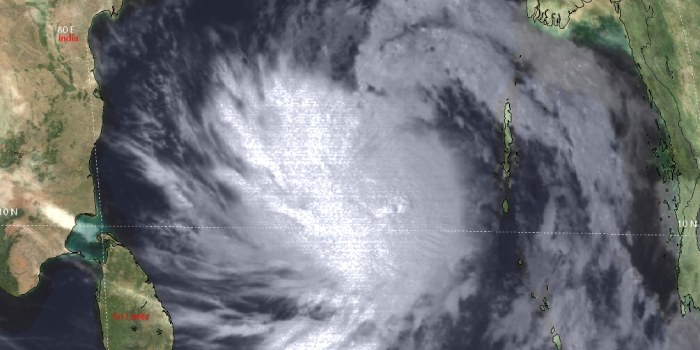 Cyclonic storm Asani continues to move northwest and pick up strength. It has become a severe cyclonic storm, the equivalent of a Cat-I hurricane, packed with a wind speed in excess of 110kmph and in gusts touching 140kmph. It is centered around 12.5 degrees North and 87.5 degrees East at 5.30 pm. The storm is expected to retain its strength or even marginally grow for the next 24 hours. Asani is likely to reach its peak intensity late tonight/early morning.

The storm has sharp outlines of symmetrical cloud-dense overcast (CDO). Curved cloud bands seem to be wrapped more tightly, indicating further intensification. The storm may even develop an 'eye', albeit ragged in the next 12hr. However, it may not upgrade further to become a very severe cyclonic storm.

Cyclone Asani is in favorable environmental conditions of light vertical wind shear and very warm sea surface temperature. It is sailing over open waters at a safe distance from the frictional forces, induced by land proximity. Though the cyclone is expected to come dangerously close to the coastline of Andhra Pradesh, still may miss the direct hit. Squally winds, an overcast sky with fairly widespread rain and thundershowers are expected over Coastal Andhra Pradesh and the neighborhood between 09th and 11th May 2022. Thereafter, the steering current influenced by the subtropical ridge (anticyclone) will result in the recurvature of the storm drifting away from the shore. Due to the northeast-southwest orientation of the coastline of Andhra Pradesh and Odisha, the storm may run parallel to it, heading for central parts of North and Head Bay of Bengal. Cold streaming from the north, entrainment of dry air from land, and relatively less warm Sea Surface Temperature will result in weakening of the storm, before coming close to the coastal areas of West Bengal and Bangladesh.