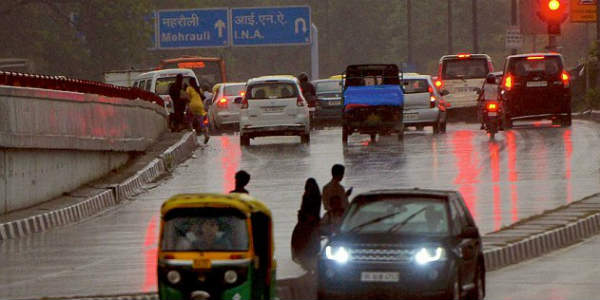 Delhi welcomed its first spell of heavy rains in August on Monday night. So much so that the city broke record of highest rainfall in last 10 years. In span of 24 hours from 8:30 am on Monday, Palam Observatory recorded 101 mm of rain, which is highest since 2008. Prior to this, the highest rainfall record in last decade stood at 67.6 mm on August 24, 2015.

Other stations were not far behind wherein Najafgarh recorded 148 mm of rain, Aya Nagar 55 mm and Safdarjung Observatory 50 mm.

According to Skymet Weather, Monsoon trough has been infusing enough moisture in the atmosphere, which would continue to aid towards formation of convective clouds over Delhi-NCR.

Rain bearing clouds are still hovering over the city, with intense clouding over western parts of Delhi and adjoining region of Haryana including Gurugram. As per weathermen, conditions are favourable for another spell over these areas shortly.

Meanwhile, eastern parts of Delhi and adjoining Noida and Ghaziabad may have to wait for showers that might appear during the late afternoon or evening, although clouding would be seen throughout the day.

Weather models are indicating that Monsoon trough will continue to run in proximity to Delhi NCR, keeping conditions conducive for more rains and thundershowers of varying intensity during the remaining days of August. Intensity of rain would be more during the next two days. Thereafter, rains would reduce but on and off light rains will keep making an appearance.

Reiterating again, rains would be patchy but sharp in nature. Hence, there is a possibility that few places might end up recording heavy rains, while some would settle with light rains.

These showers have restricted the rise in mercury, which at 12 pm was hovering around 30°C. Day temperatures are not likely to register much rise and Tuesday would see temperatures settling below normal only.