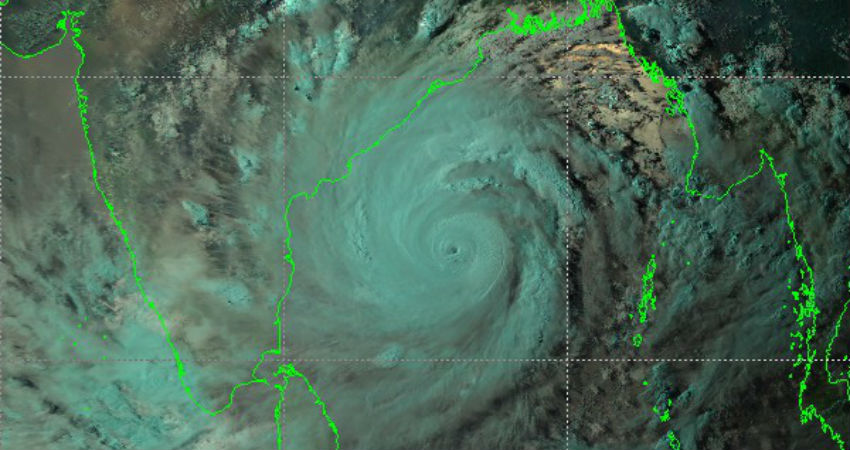 The Super Cyclone Amphan is moving over west-central and adjoining central parts of the South Bay of Bengal near latitude 13.7°N and longitude 86.2 °E. Super Cyclonic Storm Amphan is about 730 km nearly south of Paradip (Odisha), 890 km south-southwest of Digha (West Bengal) and 1010 km south-southwest of Khepupara (Bangladesh). It is very likely to move nearly northwards for some more time and then north-northeastwards across the northwest Bay of Bengal and cross West Bengal – Bangladesh coasts between Digha (West Bengal) and Hatiya Islands (Bangladesh) during the Afternoon / Evening of 20th May 2020 as an Extremely Severe Cyclonic Storm with maximum sustained wind speed of 165-175 kmph gusting to 185 kmph.

Cyclones are known for throwing surprises by defying the timelines, track, intensity, and landfall. True to this spirit, Amphan is likely to intensify into a super cyclone shortly. Presently this Extremely Severe Cyclonic Storm is centered around 14N and 86.4E, about 700km south of Paradip and 880km SSW of Digha. The storm will move north for some time and then recurve to steer NNE with ongoing intensification. The winds in the inner periphery of the storm are in excess of 200kmh and likely to build up further to be in excess of 225 kmph, and qualify to be the first Super Cyclone of this century in the Bay of Bengal. The cyclone is having a clear round ‘eye’ about 30km in diameter, a display of its might and strength. The storm is likely to retain the status of Super Cyclone for more than 12 hours before it downgrades in the open waters itself to Extremely Severe Cyclonic Storm. This will happen because of relatively cool water and vertical wind shear in the northern parts of the Bay of Bengal.

Earlier in June 2007, the Arabian Sea hosted a super cyclone GONU. This storm never came close to the Indian coastline and headed for Oman. Cyclone Amphan will make history to go on record as the strongest cyclone in the Bay of Bengal of this century. As it is, the storm is having the distinction of getting upgraded from cyclonic storm to an extremely severe cyclonic storm in a little over 24hrs. The cyclone continues to head for West Bengal- Bangladesh border and looks poised for landfall between Digha and Hatia (Bangladesh) on 20th May, during the later part of the day.