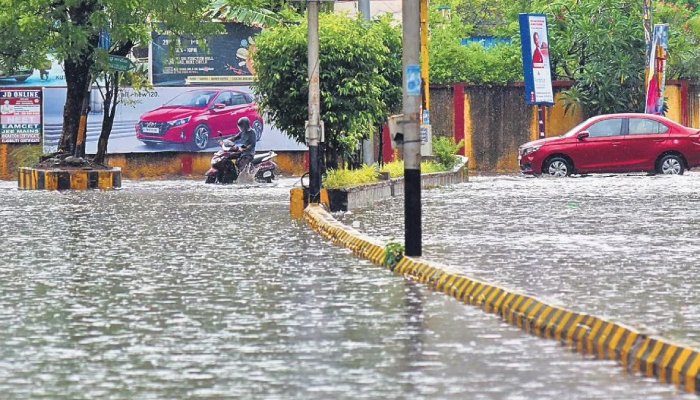 Severe cyclone Asani has weakened into a well-marked low-pressure area and is marked over South Coastal Andhra Pradesh and Rayalaseema region. The severe cyclonic storm had earlier weakened to a cyclonic storm and later to a deep depression last night. The weather system was downgraded to depression this morning and got diffused further to a low-pressure area over the same region.

The storm after weakening to a deep depression had earlier crossed the Andhra Pradesh coast between Machilipatnam and Narsapur, yesterday evening. It practically remained stationary over the same area and weakened to a depression. Defying the earlier prediction of likely movement to the northeast across Narsapur, Yanam, Tuni, Vizag, and Kalingapatnam, the depression remained stationary over southern parts of Coastal Andhra Pradesh and Rayalaseema. It is expected to meander over the same region and get diffused further.

The storm had earlier lashed parts of Andhra Pradesh with heavy to very heavy rains at a few places. Kavali and Ongole, the 2 coastal stations witnessed 3 digit rainfall of 124mm and 119mm in 24hr, much above the average. The other parts of South Andhra Pradesh and Rayalaseema also received moderate showers under the influence of weakened Asani. Tuni (46mm), Kakinada (34mm), Bapatla (30mm), Cuddappah (53mm), and Nellore (24mm) were the other few stations receiving moderate to heavy spells. Rains spread further to cover parts of Telangana and Karnataka.

Moderate rain and thundershowers are expected today also over these parts. Fleeting showers are possible over the state of Kerala and Tamil Nadu for the next 36hr. The system is likely to weaken further and ultimately merge with the seasonal pre-monsoon trough running across the south Peninsula.

Hottest Day Of Rajasthan, Severe Heat Wave Over Many Parts