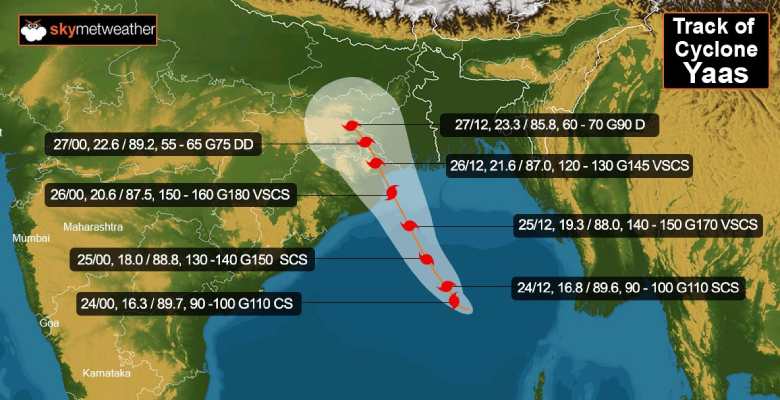 Updated on May 26 4:15 PM: Cyclone Yaas has complete the process of landfall. Rainfall will continue till tomorrow over Odisha and West Bengal. Fishermen are advised not to venture till tomorrow morning because the sea condition going to be rough.

Updated on May 26 2:15 PM: Odisha CM Naveen Patnaik said that Odisha Fire Services are carrying out restoration work in war footing in different parts of the state as Cyclone Yaas hits coastal parts.

Updated on May 26 2:00 PM: One person dead in Ramnagar 2 block of East Midnapore in West Bengal.

Updated on May 26 1:00 PM: Rising river water levels due to the landfall of cyclone Yaas have inundated large parts of West Bengal's coastal districts of Purba Medinipur and South 24 Parganas on Wednesday, as sea waves were seen touching coconut tree-tops and cars floating in floodwaters. The seaside towns of Digha and Mandarmoni in Purba Medinipur and Fraserganj and Gosaba in South 24 Parganas were among the areas affected by a storm surge of more than 2 metres above the astronomical tide level. Surging waters have breached embankments at several places in the two coastal districts, inundating many villages and small towns. Water levels of several rivers including Bidyadhari, Hooghly and Rupnarayan have risen owing to Yaas.

Updated on May 26 12:15 PM: At least six flights between Mumbai to Bhubaneshwar have been cancelled in view of Cyclone Yaas, Mumbai Airport PRO said on Wednesday.

Updated on May 26 11:30 AM: The landfall process of Cyclone Yaas began south of Balasore around 9 am today and is expected to be completed before 1 pm. The highest rainfall of 304 mm was recorded at Kusumi in Mayurbhanj district followed by 288 mm in Chandbali and 275 mm in Rajnagar. Tidal waves of height 2-3 metres above astronomical tide will continue to inundate low-lying areas of Balasore, Bhadrak, Kendrapara, and Jagatsinghpur district. The cyclone would cross Mayurbhanj and enter Jharkhand around midnight.

Updated on May 26 10:45 AM: The Indian Army Wednesday launched a rescue column to rescue 32 civilians stuck due to a surge in water levels in East Midnapore. 7 Army personnel have been deployed in East Midnapore to evacuate people and to carry out the rescue operations.

Updated on May 26 10:15 AM: ‘Very Severe Cyclonic Storm’ Yaas has made landfall close to north of Dhamra port and south of Balasore district in Odisha at 9 am on Wednesday. As the storm is relatively a large sized system, the landfall can take several hours to complete. Wind speeds ranging between 140 and 155 kms are being reported from the coastal districts.

Updated on May 26 9:50 AM: Heavy to very heavy rain and thundershower with very strong winds about (140-160 kmph gusting to 170 kmph) to continue over Anugul, Balangir, Baleshwar, Bargarh, Baudh, Bhadrak, Cuttack, Debagarh, Dhenkanal, Gajapati, Ganjam, Jagatsinghapur, Jajapur, Sambalpur, Subarnapur and Sundargarh districts during the next 18-24 hours.

Updated on May 26 9:45 AM: Cyclone Yaas is making landfall south of Balasore around 25 kms South.

Updated on May 26 9:00 AM: Over 11.5 lakh people have been evacuated from vulnerable places in West Bengal in view of the impending cyclone Yaas. The Odisha government said it has moved over 2 lakh people from vulnerable areas in coastal districts to safety.

Updated on May 26 8:30 AM: The eye of the Cyclone Yaas is approaching the Odisha coast, the landfall to commence soon.

Updated on May 26 7:15 AM: On the rescue, relief and restoration preparedness, the SRC said 52 teams of NDRF, 60 teams of ODRAF, 206 Fire Service teams and 86 wood cutting teams of forest department have already been deployed in 10 coastal and adjoining districts.

Heavy rains for Karnataka coming up, Kerala rains to continue on reducing note

Pre-Monsoon surge to get active along West coast, Andaman and Northeast India