India gears up for harsh summer 2018 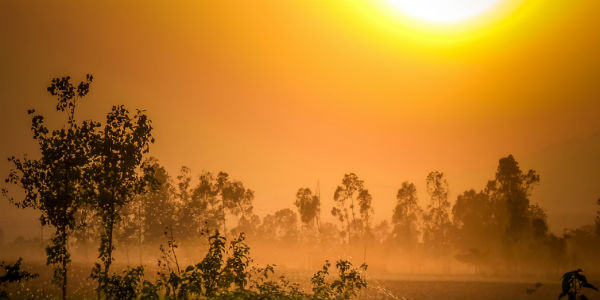 The plains of North India experience thick winter months during the months of January and February. However, transition in weather begins from the month of March over the states of Punjab, Haryana, West Uttar Pradesh and North Rajasthan.

March offers pleasant weather conditions for the plains of North India, especially the nights that remain extremely comfortable. During this month, winters start receding and summers start setting in slowly and steadily.

According to Skymet Weather, the winter systems will now start tracking in upper latitudes. Not only this, frequencies of these systems will also reduce.

Towards the end of March, signs of summers start approaching. Dry and warm weather starts prevailing over the states of north Indian plains.

However, the arrival of summers varies from year to year. As we can see, this year, summers have approached a little earlier than the previous years. Both day and night temperatures are already settling above normal across the plains of North India.

As we proceed towards April, there will be a phenomenal change in the weather conditions. We would see a significant rise in maximum and minimum temperatures.

March witnesses very little inclement weather conditions. The sky conditions stay transparent during this month. However, towards April it turns opaque because of dust storm and thunderstorm.

Finally, summers arrive in full swing during the months of May and June. It is also the time when the Southwest Monsoon makes an onset over the Indian mainland. However, the plains of North India see it towards the end of June.

March and April have bearable nights but in May and June even the nights get very uncomfortable as mercury ranges from 25-30 degree Celsius. Meanwhile, winds are also completely silent during this time, leading to very warm and uncomfortable weather.

During the summer season, relief only comes in form of a few dust storms and thunderstorms accompanied by light rains. But these conditions are to be seen only towards the latter half of the day and afternoons continue to be hot.

Frequencies of these weather activities ranges from May to June. These conditions fizzle out when the Monsoon arrives. With the onset of Monsoon, the weather conditions turn from dry and hot to warm and humid.

However, as we all can see that this year the country is already experiencing excessive temperatures which are more than normal average temperatures. Here is a list of few places of north India and their temperature changes :

Thus, we can say that the country should get ready to experience harsh summers for 2018.