No relief from Karnataka Floods as heavy rains to make a comeback tomorrow, red alert issued 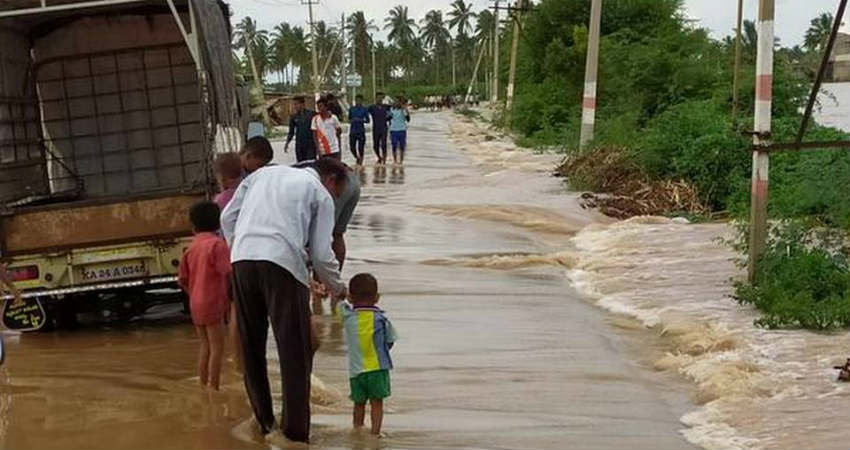 During the last 24 hours also, many parts of Karnataka have seen heavy rains with one or two very heavy spells. In fact, these rains have resulted in massive chaos causing floods in the northern parts of the state. Moreover, in separate incidents, four lives have been claimed while two were swept away.

Several rivers including Krishna, Ghataprabha and Malaprabha were breaching their banks after outflow from reservoirs in Maharashtra increased resulting in rising water levels after heavy rains.

Both Saturday and Sunday saw heavy rain in Khanapur, Belagavi, Hukkeri, and Gokak which also caused damage to crops and houses in villages which were situated at the banks of these rivers.

These rains are attributed to the Well Marked Low Pressure Area over East Central Arabian Sea. This system is expected to intensify into a Depression, but it will move away in a northwest direction away from the coast.

However, by tomorrow, another Cyclonic Circulation is expected to form over Coastal Karnataka and may intensify into a Low Pressure Area as well. In fact, with this system, heavy to very heavy rains are expected to be seen over many parts of Karnataka, specifically, the coastal and north interior parts between October 23 and 25.

Flood like situation has already been wreaking havoc in many parts. Thus, Skymet is issuing a red alert for the most parts of Karnataka between October 23 and 25.

In fact, moderate to heavy rains may be seen on October 26 as well, and it is only by October 27 that the rainfall activity will subside to some extent.