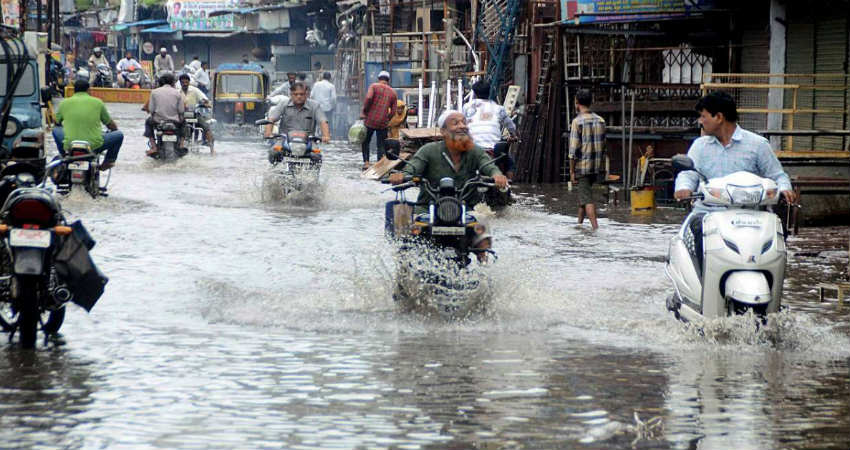 The Low-Pressure Area over Northeast Madhya Pradesh and neighbourhood with the associated Cyclonic Circulation extending up to 7.6 km above mean sea level tilting southwestwards with height persists. Its associated cyclonic circulation and moist westerly winds from the Arabian Sea converge over Central to Western India and will thus result in moderate to heavy rain and thunderstorms mainly across Madhya Pradesh and the neighbouring regions. This system will hover maintaining its intensity for the next couple of days. This Low-Pressure Area has been a slow-moving system that was formed in the Bay of Bengal and has been stationary as well and is responsible for giving rains over the eastern and the central parts of the country.

The Monsoon Trough at mean sea level now passes through Sri Ganganagar, Karnal, Etawah, centre of Low-Pressure Area over Northeast Madhya Pradesh and neighbourhood, Daltonganj, Bankura, Diamond Harbour and thence east-­southeastwards to Northeast Bay of Bengal. The Monsoon will be active with a Cyclonic Circulation over Central India.

As many as 11 districts of Madhya Pradesh have declared a holiday for all government and private on Monday due to incessant rainfall lashing parts of the state since Saturday evening.

Eventually, as days passes, reduction in the rain intensity can be a sight, thus we can say that rains in wake of Low-Pressure Area will be of varied intensity for at least next six days and will keep the Monsoon active over the affected areas and its peripheries.