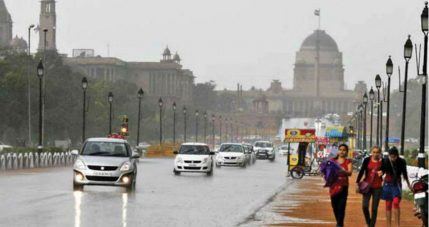 A series of Western disturbances are approaching the Western Himalayas. The first Western disturbance was on December 22nd and the second one was on December 24. Light rain and snow occurred over Jammu and Kashmir, Gilgit-Baltistan, Muzaffarabad, and the upper reaches of Ladakh. Isolated light rain occurred over the Northern parts of Uttarakhand, Punjab, Haryana, and parts of Himachal Pradesh.

The next Western disturbance which will start affecting Jammu and Kashmir, and adjoining areas by December 26th, will be stronger. Rain and snowfall will be intense over hills and may continue until December 28. An induced cyclonic circulation is over Northwest Rajasthan and adjoining areas. Scattered rain and thundershowers are possible over western and northern parts of Rajasthan, Punjab Haryana, Delhi, parts of Uttar Pradesh and Madhya Pradesh between December 26th and 28. Rain activities will cover parts of Bihar Jharkhand, Chhattisgarh, and isolated pockets of Vidarbha on December 28 and 29.

These rains can be termed as unseasonal for Madhya Pradesh and Maharashtra. But for Northwest India, winter rains are common in the wake of Western disturbances during December and January.