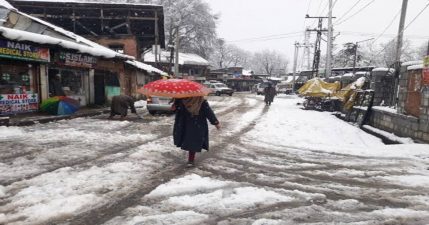 Western disturbances continue to target the mountains of North India during February 2022. Frequent rain and snow will keep lashing mid and higher reaches, occasionally intruding the lower ranges. However, plains of the region will be spared from any inclement conditions and weather activity will remain mostly confined to fluctuating mercury levels. The absence of clouds will raise the day temperature and the continuation of snow will arrest any quick rise of the minimum.

Western disturbances start affecting North India in early November and continue across the winter months of December, January and February. The Winter system remained variant this season and defied the norms almost every month. November 2021 hardly witnessed any active weather system and remained mostly dry. December 2021 observed only 2 effective western disturbances which mainly impacted central and eastern parts. Mountains were eluded of snow and the agricultural bowl of Punjab, Haryana and West Uttar Pradesh suffered large rainfall deficiency. January somehow compensated for the early winter loss and witnessed record 7 western disturbances, with 3 of these drenching the entire region excessively. January ended up as one of the rainiest in the last 2 decades, by registering 129% of pan India surplus rainfall.

The month of February started on a wet note and experienced 2 spells, simultaneously for hills and plains. The upcoming 2 weeks may largely strike the hills and relieve plains on most occasions. There is a trail of western disturbances between 14th and 23rd February, moving across the hilly states with varying intensity. The 1st and the 2nd system passing across the mountains between 14-16 Feb and 17-19 Feb will be weak and the snowfall will remain confined to the higher reaches. The lower hills and the foothills are expected to have rain and thundershowers, particularly in association with the latter one. The 3rd western disturbance is likely to arrive on 21stFeb and increase the spread and intensity on 22nd and 23rd Feb. The remnant effect may be seen even on the following day, 24thFeb.

Plains of north India will largely remain outside the peripherals of these disturbances. However, the resultant change in the wind pattern will see the mercury swinging up and down. Windy conditions are expected on most days increasing the chill factor during night and morning hours. Nippy weather of early hours will be replaced by warm afternoon and the maximum temperatures are likely to stay in mid 20’s. Minimum temperatures will continue to run single-digit and are likely to hover between 5°C and 8°C at many places like Ambala, Karnal, Hisar, Ludhiana, Patiala, Jalandhar, Pathankot and Amritsar. Rains will generally be missing the region in entirety, except for a few places along the foothills. The possibility looms large for locations like Pathankot, Ropar. Chandigarh and Dehradun to have rain and thunderstorm, especially with the 3rd western disturbance.