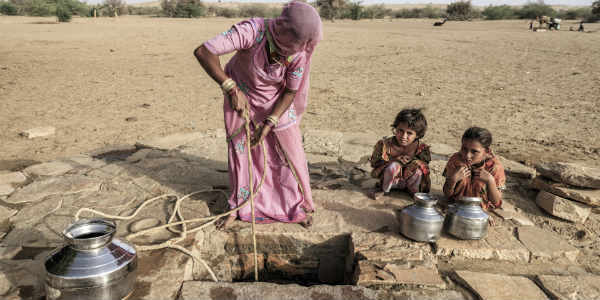 Summers will be hitting hard this year and its glimpse is clear from the fact that temperatures have already started touching skies. Most parts of the country are already witnessing the mercury level crossing the 40-degree mark.

The sudden upsurge in the mercury in much of the Central, West and North India, especially during the final days of March, could even lead to water catastrophes. As per Skymet Weather, this is just the beginning and April and May are expected to hit even harder.

Though Skymet Weather foresees a minor relief in the mercury levels within the next three to four days but the forthcoming days of April and May will see temperatures settling above normal. The possibility of any pre-Monsoon showers showing up in the region has been ruled out for the next two months.

In fact, temperatures across most parts of the country spanning from March to May will stay above normal. Due to this, no rains are foreseen for the region and thus the water levels in the 91 odd reservoirs in the entire country have also started dipping.

This water is used for drinking and irrigation facilities. Moreover, the water levels in these reservoirs have dropped by four percentage points between March 16 and March 30.

The reservoirs in South India are facing the worst effects of the heat with the water levels dropping tremendously. In fact, a few weather experts also feel the hotter the weather gets, the more water woes are expected.

Some of the Southern states of the country including Karnataka, Kerala, Andhra Pradesh and Telangana are already under the influence of drought and this year the summers are going to worsen them even more.

Moreover, as predicted by Skymet Weather, Monsoon this year could be less than the average signaling long and dry summer month to prevail. This could trigger the water crises even more.

However, Prime Minister Narendra Modi had recently directed the ministries and states to focus on water conservation techniques under the various schemes.

“If the summer is long and El Niño leads to a delay in monsoon, it could affect three major areas — on agriculture in rain-fed areas; livestock in Andhra Pradesh, Rajasthan, Maharashtra and Karnataka; and the human population, as water demand will rise fast while replenishment of reservoirs, tanks and wells could take longer than usual,” said Bharat Sharma, professor emeritus, International Water Management Institute.