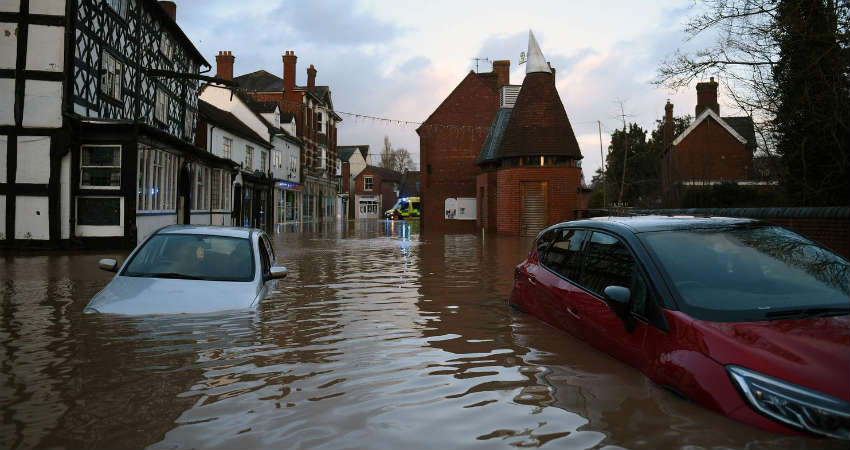 Winter Storm Dennis, the second strongest Bomb Cyclone has still been wreaking havoc over the United Kingdom with flood warnings still remaining in place for many parts. 10 severe flood warnings have been given for the rivers Wye, Severn Trent as well as Lugg.

Meanwhile, around 180 less severe flood warnings remain in parts with likelihood of rainfall on both Wednesday as well as Thursday. Flooding conditions will only get worse with this.

The River Wye had already reached the highest level ever in Hereford after heavy rainfall activities. So far, three people have died due to the storm Dennis.

In fact, the storm was strong enough to push a cargo ship to the Irish Coast, that was drifting into the sea since 2018. Flooding along with power outages have also been observed in Southwest Sweden wherein 100 people were evacuated on Monday in the fear of a levee collapsing.

Published on February 18: Storm Dennis is the second strongest Bomb Cyclone with winds being tune to almost hurricane force. The storm has been dumping more rains than their monthly normal in some parts. The storm came right after Ciara and the woes are even more this time as all the water bodies are already full.

Over 200 flood warnings are in place with several rivers bursting their banks. In fact, Storm Dennis has also claimed a woman’s life in Worcestershire.

Talking about the Bomb Cyclone, in this case the pressure dropped to 56 millibar in 24 hours which is more than twice the rate of drop for declaration of a bomb cyclone. Though they are associated with heavy rains, the catastrophic feature remains as the hurricane force winds.

Workers of the emergency services rescued residents in boats in the Hereford area as River Wye breached it banks to the highest level ever. As River Severn flowed above the danger levels, people were also rescued in Shrewsbury. Due to these storms, the defences that were built after the catastrophic floods of 2007, could be breached as well.

England had seven severe warnings, with Wales having two of them for advice for evacuation for homes. However, no evacuations were in place for Scotland.

Travel disruption was another problem for the United Kingdom wherein roads were closed, and several train lines remained disrupted. Over 480 properties have been flooded. Road blockages have caused several closure of schools.

As per weathermen, more rains are expected to be seen during the latter half of the week, thus an improvement in the situation is not foreseen per se.